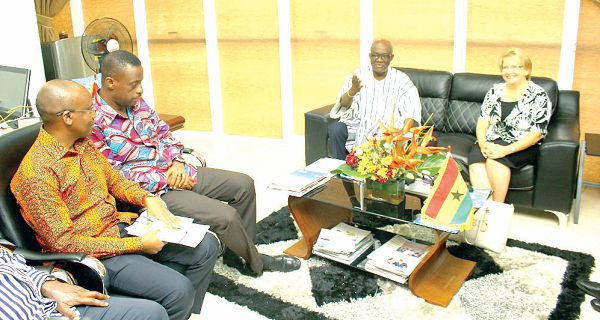 Ghana is exploring the option of sourcing aircraft from Canada and Ethiopia to make up the fleet for the national home- based carrier, the Minister of Aviation, Mr Joseph Kofi Adda, has hinted.

Although the number of aircraft to make up the fleet has not yet been firmed up, discussions currently centre around eight, according to the minister.

He said four of the planes would be sourced from Canada and the rest from Ethiopia.

Mr Adda dropped the hint when he interacted with journalists after the Canadian High Commissioner to Ghana, Ms Heather Cameron, paid a courtesy call on him in his office in Accra.
The meeting was held behind closed doors.

The visit was to discuss potential areas of collaboration between Ghana and Canada to strengthen the aviation sector.

Apart from discussing issues related to the home-based carrier, they also discussed issues of capacity building and export credit facilities that Ghana could source from Canada.

Mr Adda said President Nana Addo Dankwa Akufo-Addo had made aviation a priority sector because of the positive impact a strong aviation sector had on the economy.

Canada, he said, had a good track record in aviation, particularly in the manufacture of aircraft at the Bombardier Plant in Toronto.

For her part, Ms Cameron said the closed-door meeting with the minister was part of plans to kick off the year with discussions on what the two countries could accomplish in the aviation sector together.

She said Canada and Ghana had had a very important and long-standing partnership and the two countries continued to work towards strengthening the relationship for their mutual benefit.

The diplomatic relations between the two countries date back to Ghana’s independence, and Ghana was Canada’s first international development partner, she recalled.

“Aviation is an important sector in Canada and also important to Ghana’s economic development and we are pleased we have the Canadian Bombardier flying here in Ghana. There are lots of potential for growth,” she said.

Ms Cameron said Canada and Ghana would discuss other strategies, including data collection through training, and the provision of other services.

The envoy said working together would be mutually beneficial for the two countries.

The move is expected to enhance passenger numbers to the respective countries since airlines would soon be able to fly directly from Accra to the partner countries.