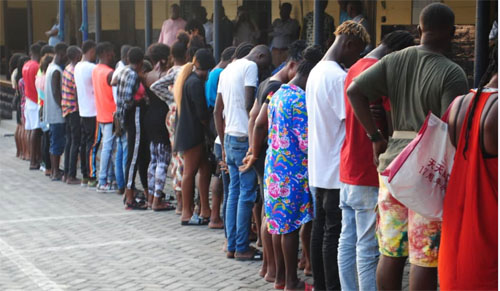 About 230 suspected criminals and commercial sex workers were on Friday dawn arrested by the police at the environs of Soldier bar at the Kwame Nkrumah Circle in Accra.

Those arrested included Ghanaians and other nationals from Togo, Benin, and Nigeria.

Items found on them included 33 motorbikes, 38 wrappers of dried leaves suspected to be India hemp, cash of GH₵6,750, a Beninese passport, health insurance card, an ATM card, and 153 mobile phones.

Speaking to journalists, the Director of Operations, ACP Arhin Kwesi Annor said the operation commenced around 11 pm on Thursday, April 15, 2021, to 2 am on Friday, April 16, 2021.

“So for the past two weeks we have been monitoring their activities, and then yesternight we decided to swoop on them. Fortunately, when we went there we were able to arrest some people or some suspected criminals. The total number of suspects that were arrested is 230”, he said.

“We believe that some of these motorbikes are used to commit a lot of crimes. You can talk about snatching of mobile phones, snatching of bags among others”, he added.

He said the suspects will be screened and those found culpable will be dealt with.

He said such an operation, will be replicated to curb crime in the city.