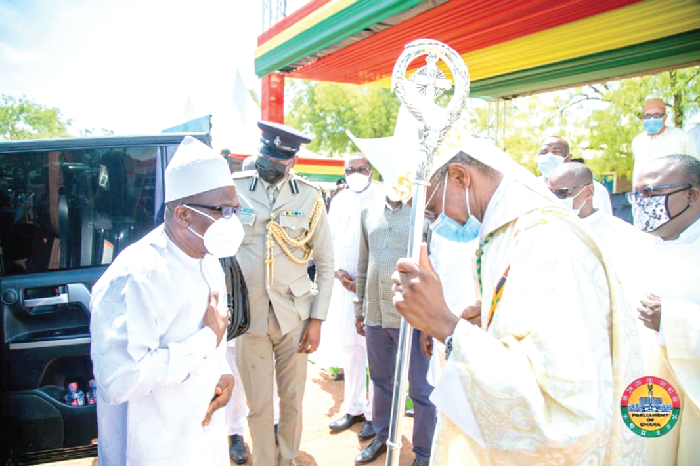 The Catholic Bishop of Wa, the Most Reverend Richard K. Baawobr, has urged Parliament to enact laws against Lesbian, Gay, Bisexual, Transgender, Queer and Intersex (LGBTQI) life in the country.

The Most Rev. Baawobr also reminded Parliament of the call by the Ghana Catholic Bishops Conference not to concede to any external pressure to legalise LGBTQ in the country.

He was delivering a homily at a thanksgiving mass for the Speaker of Parliament, Mr Alban Sumana Kingsford Bagbin, at Sombo, his hometown, in the Nadowli-Kaleo District in the Upper West Region last Thursday.

Mr Bagbin was on a three-day tour of the region to express gratitude to the people for their support during his 28-year service as a Member of Parliament (MP), leading to his election to the position of Speaker of Parliament.

Others were the Upper West Regional Minister, Dr Hafiz Bin Salih; the National Chairman of the National Democratic Congress (NDC); Mr Samuel Ofosu Ampofo; the General Secretary of the NDC, Mr Johnson Asiedu Nketia, among others.

The Most Rev. Baawobr described Mr Bagbin’s election to the office of Speaker as a divine call, since his election was unique in the history of Parliament.

He, therefore, asked Mr Bagbin to use the opportunity to ensure that the necessary laws were passed to build a resilient nation, adding that he should see himself as the Biblical Moses chosen by God to lead the people of Israel to the Promised Land.

The Paramount Chief of Guli, Naa Seidu Braimah, on behalf of the Upper West Regional House of Chiefs, commended Mr Bagbin for his humility and hard work over the years.

Mr Bagbin said the hung Parliament he presided over was a desire by God for greater harmonisation in the country’s politics, adding: “God wants Parliament to defend the interests of the people a lot more by strengthening institutions and not individuals, hence the outcome of the recent election and my surprise emergence as Speaker of Parliament at this time.

“We also have a responsibility, given the peculiarity of the current deployment of numbers in the House, to maintain a balance between political party interests and those of the country. This will at times come with all kinds of misunderstanding and misrepresentations, as you may have noticed already.

“I am conscious of the dictates of current and emerging issues that leadership must find solutions to on behalf of the citizenry. Problems of inequality, a raging health pandemic that has become the new normal, the state of deprivation, instability in the sub-region, global problems of isolationism, civil strife, discrimination, migration challenges, among others, continue to confront us all as a people,” he said.

Mr Bagbin gave an assurance that under his leadership, Parliament would not shirk its responsibility.

“What we want from the people is patience and understanding. Criticism is good, so feel free to criticise when the need arises, but do so by first seeking to understand the issues at stake and developments in relation to them. This is because what meets the eye is not always what the real issue is,” he stated.

Mr Kyei-Mensah-Bonsu described Mr Bagbin as a gem who had devoted his entire life to the Legislature, culminating in his current position.

He prayed for God's guidance for the Speaker in his tenure for the accelerated development of the country.

Mr Iddrisu gave an assurance that the entire membership of Parliament would work together for a successful legislative business.

“We have the seventh Speaker of the eighth Parliament and most experienced and qualified among our group in whom we trust that he will be fair and firm as Speaker.

“I can only remind Mr Speaker of his oath, which says ‘I will do right to all manner of persons, without any affection or ill will’; on onerous obligation he himself accepted before Parliament when he pledged to be neutral and impartial,” he said.