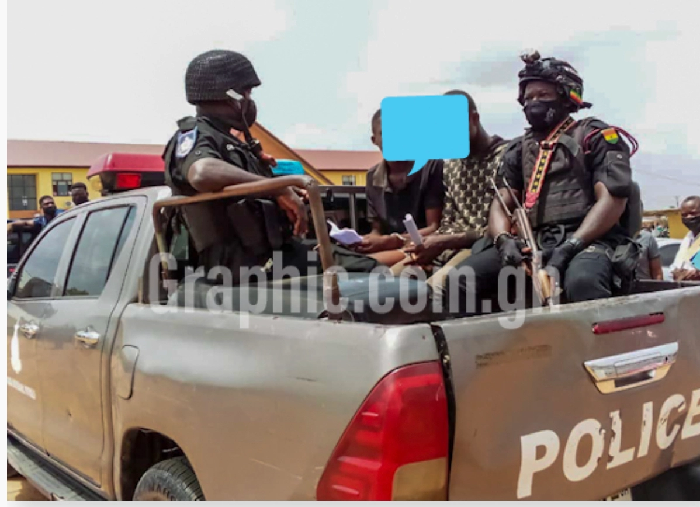 The suspects (faces covered) with the police after their first appearance in court
30.5k Shares

Since news broke about the killing of 10-year-old Ishmael Mensah Abdallah by his friends for ritual purposes last Saturday, Ghanaians are yet to come to terms with the rather sad incident.

Class Four pupil, Ishmael, was allegedly killed on Holy Saturday by two teenagers, Nicholas Kini, 18, and Felix Nyarko, 16, at Coca Cola, close to Lamptey Mills, in the Ga South Municipality near Kasoa in the Central Region.

The incident has been difficult for many people to comprehend, considering the ages of the alleged perpetrators.

As grotesque as the incident is, the Daily Graphic believes that it is time parents sat up and lived up to their responsibility of providing the requisite parental guidance for their children.

It is not enough just to provide shelter, food, clothing and other niceties for children, without knowing who their friends are and what they do at any point in time. Many a time, parents even go to bed while their children sit back to watch television and entertain their visiting friends.

It is important that we observe and monitor every movement or activity of our children to protect them from falling prey to the ills of society. This is important because the suspects in the murder have reportedly indicated to the police that they were motivated by television advertisements to get quick money through a fetish priestess who, fortunately, has since been arrested.

Although the police do not have statistics on the growing trend of juvenile involvement in such crimes, we think that the country will be heading towards a dangerous labyrinth if we do not sit up to address some of these emerging threats to our social fabric.

The Daily Graphic thinks it is also a wake-up call for parents and every Ghanaian to be alert to happenings in our environment. We should not be quick to believe in unfounded claims by the people around us.

As parents, we need to appreciate that while learning and exploring, children learn new things and encounter situations, and this is where, as parents, we must step in to assist them. With many parents both working, our children are often left abandoned.

The situation is compounded by the advent of digital devices that revolve around us. Our children use such devices to watch videos and do other things that many parents are unaware of.

As parents, we must learn to inculcate in our children the right moral values, the spirit of hard work, diligence and discipline. This will require that we enforce certain rules and regulations at home to ensure that children do not stray.

We commend the police for the swift manner in which they arrested a suspected fetish priestess behind the horrendous crime. We very much encourage the police to do more to bring all the perpetrators to book.