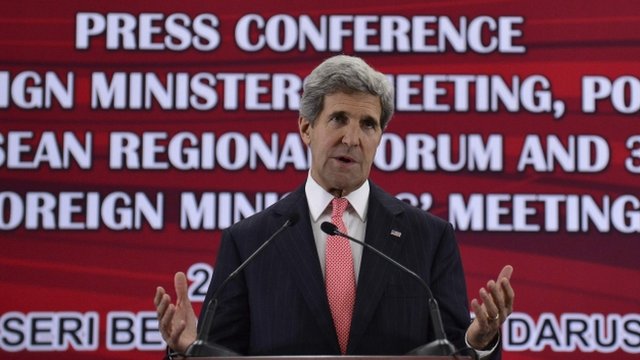 French President Francois Hollande has said allegations that the US bugged European embassies could threaten a huge planned trade deal. Negotiations over the EU-US pact, the biggest bilateral deal ever negotiated, are due to start on 8 July.

Mr Hollande said there could be no negotiations without guarantees spying would stop "immediately".

US Secretary of State John Kerry said earlier that activities to protect national security were "not unusual".

German Chancellor Angela Merkel's spokesman, Steffen Seibert, said "bugging friends is unacceptable... we are no longer in the Cold War".

He added that Germany wanted the deal to go ahead but "mutual trust is necessary in order to come to an agreement".

The allegations of US security services bugging EU missions and the embassies of friendly European countries - including the French, Italian and Greek embassies - come from documents apparently leaked by an ex-CIA analyst.

He is believed to be at an airport in Moscow, and is seeking a destination safe from prosecution by the US authorities.

Green parties in France and Germany have called on their governments to offer Mr Snowden asylum.

"Someone like that should be protected," said Juergen Trittin, leader of Germany's Greens.

"He should get safe haven here in Europe because he has done us a service by revealing a massive attack on European citizens and companies. Germany, as part of Europe, could do that."

Green Party leaders have also called for existing US-EU agreements on the exchange of bank transfer and passenger record information to be cancelled.

The EU's foreign policy chief Catherine Ashton raised concerns about the reports in a meeting with Mr Kerry in Brunei.

He said he did not know the truth of the allegations, published at the weekend by Der Spiegel in Germany and the Guardian in Britain.

But he said at a press conference: "Every country in the world that is engaged in international affairs of national security undertakes lots of activities to protect its national security and all kinds of information contributes to that.

"And all I know is that is not unusual for lots of nations. But beyond that I'm not going to comment any further until I have all the facts and find out precisely what the situation is."

European leaders have called for further details from the US administration on the allegations. Italy's Foreign Minister Emma Bonino said Rome had "requested the clarification of a very thorny affair."

The first round of negotiations over a major new trade pact between the European Union and the US are due to start in Washington DC next week, but could now be delayed.

France only cleared the way for the talks to go ahead in mid-June, after EU members accepted its demand to shield movies and online entertainment from the might of Hollywood and Silicon Valley.