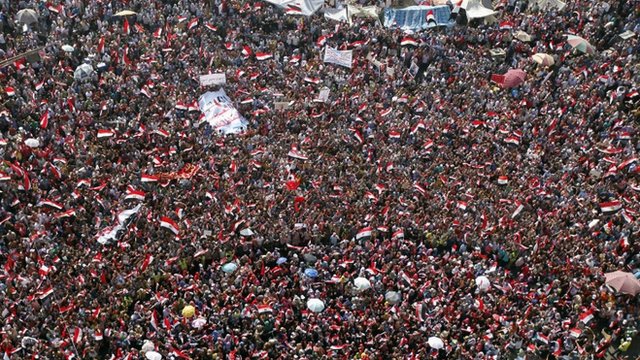 Huge protests calling for the resignation of Egypt's President Mohammed Morsi and early presidential elections are taking place in the capital, Cairo, and other cities. Tens of thousands of opponents have massed in Tahrir Square and outside the main presidential palace.

Protesters accuse Mr Morsi of failing to tackle economic and security problems since taking power a year ago.

A presidential spokesman urged them to respect the democratic process.

Morsi supporters massed in the Cairo suburb of Nasr City with banners denouncing the opposition.

The president's critics say the country's first Islamist president has put the agenda of the Muslim Brotherhood party ahead of the country's wider interests.

In Cairo, they have been chanting: "Irhal! Irhal!" ("Leave! Leave!"), reports the BBC's Aleem Maqbool.

Demonstrations are being reported across the country

Windows in the Muslim Brotherhood headquarters in Cairo were reinforced with sandbags ahead of the protests.

Some Morsi supporters in Nasr City are wearing banners saying that they are willing to be martyrs for the cause of keeping the president in power.

Presidential spokesman Ihab Fahmi called on all Egyptians to "unite and listen to the sound of wisdom".

"Political diversity necessitates on all parties to abide by the democratic process," he said.

He told reporters that the presidency was open to a "real and serious national dialogue".

The chants in Tahrir Square alternate between humorous songs and angry protestations, all calling for the president to step down.

Egyptians have been talking about this day for many weeks - with the opposition vowing not to leave until Mr Morsi steps down and calls early presidential elections, our correspondent says. 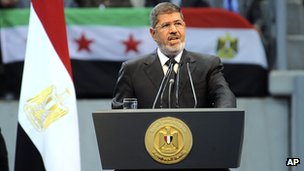 But supporters of Mr Morsi point out that he was elected and say he should see out his full term in office, so there is a real split in Egyptian society at the moment, he adds.

The grassroots movement Tamarod (Rebellion) is behind the petition, which has united liberal and secular opposition groups, including the National Salvation Front.

However, many ordinary Egyptians - angered by Mr Morsi's political and economic policies - are also taking part in the rally in Tahrir Square.

Hanan Bakr, who travelled specially from Dubai where she lives, to join the "second Egyptian revolution", told the BBC: "I'm hoping to stay on the streets until the whole regime of the Brotherhood is brought down.

"If Egypt falls under Islamist extremism, this will affect the whole region."

President Morsi earlier this week offered a dialogue - a move rejected by his opponents.

Mr Morsi, who hails from the Muslim Brotherhood, became Egypt's first Islamist president on 30 June 2012, after winning an election considered free and fair.

His first year as president has been marred by constant political unrest and a sinking economy.