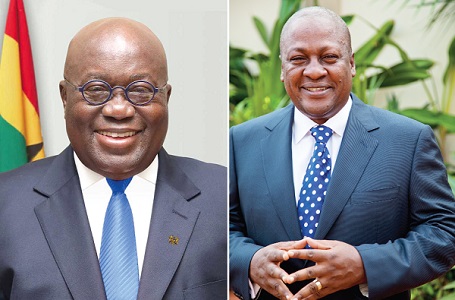 The Vice-President who has introduced digitization to Ghana, appreciably formalizing the economy, bringing much needed convenience and expedited services to Ghanaians, is not a failure.

Similarly, the Finance Minister who has handled finance for six years, widening access to secondary education, who paid public service workers for the nine months they did not work during COVID-19 lockdown, fed numerous low-income earners, increasing public service wages alongside, cannot be a failure.

He cautioned the TUC in early 2022 that the state could ill-afford the wage increase demand, since 60 % of the national funds go into salaries.

The duo that ingeniously rolled out the Nation Builders’ Corps concept, engaging a backlog of unemployed graduates, cannot be failures. The concept pushed into various sectors, a cross-section of graduates who could not be employed by the Mahama administration, due to IMF employment freeze, because they received allowances, not salaries. The engaged experienced financial relief, received technological training and industrial experience.

Digitisation has propelled a strong programme in Information Communication Technology for learners, especially girl education. Additionally, the Vice President has initiated a sophisticated entrepreneurship laboratory for (youth) skill acquisition, alongside short- and long-term skill development programme for various trades. Utilizing national funds for currency in human resource development is not a failure.

Indeed, fiscal issues could have even been better handled, shortcomings contributing to current economic crisis, but that is a painful dent, not failure.

Mr Mahama has more in common with President Akufo-Addo than the former apparently realizes. When Mr Mahama converted six polytechnics to technical universities (TUs) in 2016, he stressed the urgent need for competency-based training. Logically, his administration supplied industrial equipment and machinery for practical instruction.

Else, he would have realized the endangered status of hands-on training due to systemic marginalisation of technicians.

The polytechnic system had failed to develop a career path for technicians. Consequently, they divert for progression. Though TUs received machinery and equipment, persistent scarcity in technicians obstructs the nurturing of competent graduates for industry.

If the TUs had fulfilled the mandate for competency-based training, President Akuffo-Addo’s policy of One-District: One Factory could have been smoothly rolled out, strengthening national manufacturing base.

A competitive manufacturing sector could have strengthened the Cedi, improved sustainable employment, opened avenues for new joblines and commodity export, which might have improved the nation’s GDP and effectively hold the IMF at bay.

To wit, policies initiated by the Executive must be rolled out by stakeholders — public, private and consumers. Stakeholder profligacy implies that excellent policies, birthed by huge investments, remain dormant, and funds cannot be recouped.

Sinking national coffers roll to the IMF. Which stakeholders are breathing fire on the Vice-President and Finance Minister, which torch is being branded by Mr Mahama? Ironically, the IMF believes in the country’s leadership (Daily Graphic Jul.7, p.22).

Excellent pragmatic policies have been initiated in the past six years, but a saturated environment of nepotism, indolence, opportunism and wastefulness, rapidly erodes the impact.

The human capital needed to bolster the economy for innovation, mostly, believe they are entitled to wealth and privilege, alarmingly missing the willpower that propels societal progress. Such sing, pray and boast whilst Ghana regresses.

Synergy might salvage not only the economy but Ghanaian dignity. The constant dancing with IMF implies —in the Akan language — akͻhwisεm (national) wastefulness, an abhorring reputation, as Elizabeth Ohene has so succinctly captured it (Daily Graphic, July 6, 2022).

Shirking repulsive materialism, regressive debates, fanaticism for diligence is required. Halting the commercializing of education for human capital is necessary.

Human capital with emotional intelligence, a high sense of moderation and duty, plus community sense, could halt the wasteful attitude.

The nation has enough for everybody’s needs but not enough for the majority greed. Choices and consequences! Assertiveness spirit, commitment, perseverance, good humour, diligence might make us commit to humans, not vain wealth.

Discipline, fenced by moderation and conscientiousness, might aid us to bid eternal farewell to the IMF at no. 18.