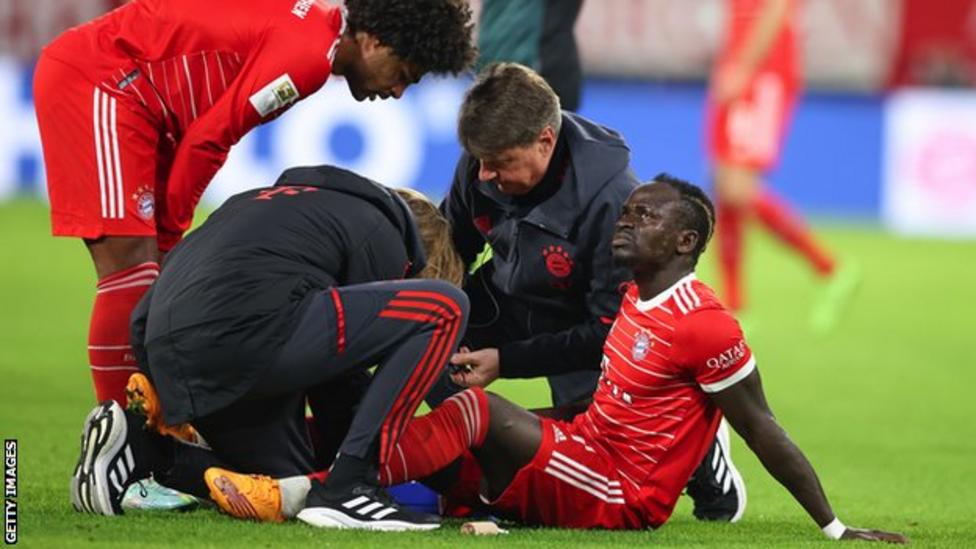 Senegal boss Aliou Cisse said Sadio Mane does not need an operation on the injury he sustained playing for Bayern Munich
30.5k Shares

Sadio Mane has been included in Senegal's squad for the World Cup in Qatar despite suffering an injury scare on Tuesday.

The 30-year-old forward was forced off in the first half of Bayern Munich's 6-1 victory over Werder Bremen.

The German champions said he had an injury "to the head of his right fibula" and will miss Saturday's game against Schalke.

Senegal begin their Group A campaign against the Netherlands on 21 November.

"We are monitoring the situation and have sent one of our doctors to assess him," Senegal coach Alioy Cisse said at a press conference in the Senegalese capital Dakar on Friday.

"On Thursday, Sadio spent the whole day in Munich before travelling to Austria for further tests. The good news is that he does not need an operation.


"We want the situation to evolve in two-three weeks. I don't want to rule him out."

Former Liverpool player Mane is Senegal's star player and talisman, having scored the winning penalty when the Teranga Lions became continental champions for the first time in February, defeating Egypt in a shoot-out in the Africa Cup of Nations final.

Less than two months later, Mane repeated the feat, netting the decisive spot-kick as Senegal beat Egypt - in a clash that again pitted him against then Liverpool team-mate Mohammed Salah - on penalties in a crunch play-off to qualify for Qatar.

As his country's record goalscorer, with 34 goals in 93 caps, Mane's fitness is key to Senegal's chances and Cisse will be sweating on his availability ahead of their opener against the Dutch, with matches against hosts Qatar (25 November) and Ecuador (29 November) to follow.

Senegal's best performance at a World Cup finals came on their debut in 2002, when a squad containing Cisse stunned defending champions France in their opening game and went on to reach the quarter-finals.

The west Africans are 18th in the Fifa world rankings, and have been Africa's highest-ranked side since November 2018.

Cisse will also have concerns over the fitness of Koulibaly's regular centre-back partner Abdou Diallo, who suffered a knee injury in the warm-up for RB Leipzig on Wednesday and was withdrawn from the starting XI to face Freiburg,

Both full-backs from the Nations Cup final triumph against Egypt are absent, with right-back Bouna Sarr injured and Saliou Ciss omitted having been without a club since end of last season.

Ndiaye is among six new faces from the squad which won the Nations Cup title in Cameroon, with Youssouf Sabaly, Ismael Jakobs, Krepin Diatta, Pathe Ciss and Jackson Nicolas also making it in.

The squad announcement comes a day after former Birmingham City and Portsmouth midfielder Cisse signed a new deal to remain as Senegal boss until 2024.