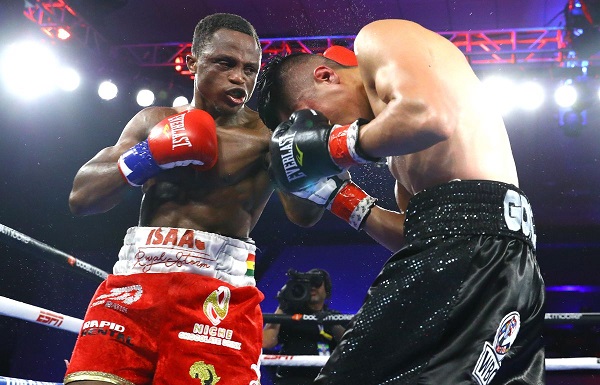 Top boxing promoter and manager, Alex Ntiamoah Boakye of Box Office Promotions, has advised former world champion Isaac Dogboe to entreat his promoters to negotiate a good deal that will fetch him a lot of money in his next bout.

Mr Ntiamoah Boakye, who once promoted Dogboe, 27, on his bill said the come-back-kid was now spoilt for choice and must accrue the needed financial benefits from it.

“He’s now gotten the shot at the World title, either the World Boxing Organisation (WBO) or the World Boxing Council (WBC) and so it is up to his promoters to negotiate what is favourable for him monetary wise,” he told the Graphic Sports in an interview in Accra.

He called on Dogboe, who has a professional record of 26 bouts with two losses in 28 bouts, to make good money from his labour as he had little to do with money during his nascent professional stages and even when he won the world title.

“Boxing is all about money and the business aspect is very important, he should and must not overlook that, it will help him eke out a living after he quits the sport,” Mr Ntiamoah told the Graphic Sports.

Dogboe, who was raised in the UK, secured his fourth win in a row against American Joet Gonzalez following back-to-back losses to Mexican Emanuel Navarrete between 2018 and 2019.

Dogboe’s fight last month was a WBC featherweight title eliminator that also had a WBO International belt on the line, Dogboe is now well-placed to challenge for a world title in his next fight as he pursues his dream of becoming a two-time world champion.

Dogboe has indicated his readiness to step into the ring once again to face WBC featherweight title holder and his nemesis, Emanuel Navarrete, who defeated the Ghanaian twice and also ended his reign as the WBO super bantamweight champion three years ago.

Aside from being well-positioned to challenge for the WBO featherweight belt, Dogboe said he would relish returning to the UK to take on Josh Warrington, the IBF featherweight champion.