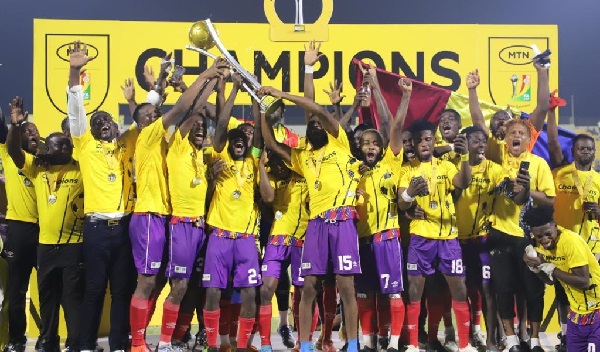 Hearts of Oak’s talented player, Daniel Afriyie Barnieh, got himself a fitting 21st birthday present as he scored a masterpiece of a goal to bring his team back from a goal down to defeat Bechem United 2-1 to successfully defend the MTN FA Cup at the Baba Yara Stadium in Kumasi on Sunday.

Barnieh, who until his 60th minute match winner, had laboured in vain in a bid to put the icing on his birthday cake, popped up unmarked to connect Gladson Awako's cross to the blind side of goalkeeper Abdulai Iddrisu in post for Bechem United.

For Bechem who took the lead and looked determined to win their second FA Cup in six years, their effort was undermined by the expulsion of their livewire, Augustine Okrah, for headbutting assistant referee one, Stephen Balanguena, leaving referee Stephen Balanguena with no other option than to send off the enterprising forward. It was an anticlimax for their star player around whom the team’s fortunes revolved. Until that incident, he created his side’s goal and delighted the crowd with his immaculate footworks.

However, he failed to control his temper after the assistant referee had wrongfully awarded a throw-in to Hearts instead of Bechem. And in a fit of anger, he jumped to headbutt the referee to the chagrin of his teammates and officials for letting them down.

Hearts, who needed the trophy badly to placate their fans after a disappointing season, won against the run of play as their opponents were in the driving seat until that silly challenge by Okrah in the 64th minute.

Bechem United enjoyed the early cheers from the fans most of who were bussed to Kumasi a day ahead of the match. Their early dominance, including three successive corner kicks, were wasted, but Emmanuel Avornyo and Augustine Okrah remained the main architects of the attacking force.

However, the Phobians’ response was equally swift with Barnieh, Awako, Caleb Amankwah combining beautifully with support from the right-back, Samuel Inkoom.

By the 10th minute, Okrah -- the third highest scorer in the just-ended Premier League with 14 goals -- had set the stadium alight with his surging runs down the left and right side of the attack, and created a scoring chance which attacking midfielder, Francis Twene, failed to connect home.

Successive attacks from that move were thwarted by Hearts’s goalkeeper, Richmond Ayi, as the Bechem supporters screamed for the opening goal.

Bechem United literally strolled with the ball in total dominance by the 12th minute as Hearts were kept on the back foot, and looked a pale shadow of the form that won them their 11th MTN FA Cup trophy last year. 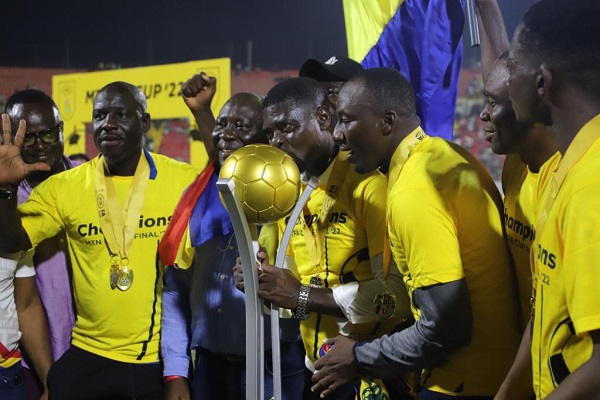 Barnieh in a few moments of anxiety fumbled with a few scoring chances, including the 17th minute when he was sandwiched by the Bechem defenders in their goal area to deny him a goal.

Aware of the potency of the Bechem attacking force, Hearts were cautious in their build-up, mostly very slow which posed little threat to goalkeeper Iddrisu.

Okrah easily tore the Hearts defence apart and delivered an unusual right-footed shot which was pushed into the path of Avornyo who connected in the 45th minute to give Bechem the lead.

But two minutes into added-on time, Amankwah delivered a volley to make it 1-1 at half time.

Bechem continued their dominance as Hearts fought back until Barnieh pulled the trigger when least expected to punish the Bono team with a perfect finish to deliver the trophy to the Phobians on the 60th minute. 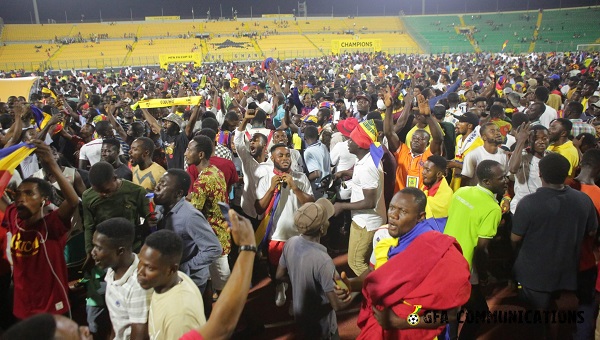 Cloud nine: Excited supporters of Hearts of Oak invade the inner perimeter of the stadium to celebrate their 12th FA Cup triumph

At the end of the exchanges, Hearts Skipper Fatawu Mohammed gleefully lifted the FA Cup trophy for the second successive time as Hearts players, officials and supporters went into a frenzy celebrating their record extending triumph.