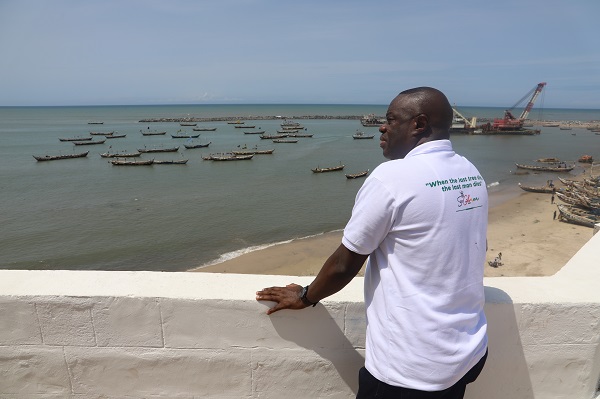 The Ministry of Tourism, Arts and Culture has secured a GH¢55 million grant to support businesses, boost tourism and create employment for the youth.

Provided by the World Bank, the grant will be disbursed through the Ghana Tourism Development Project to beneficiaries in three categories — COVID-19 relief funds, small and medium enterprises (SMEs) and tourism site upgrades.

The sector Minister, Dr Mohammed Ibrahim Awal, who announced this shortly after visiting some tourist sites in the Greater Accra Region yesterday, explained that the move was also to help the sector come out of the woods, after being hit hard by the adverse effects of COVID-19.

The sector, he said, was being revamped, with the expectation of generating $5 billion for the country annually, effective next year.

Dr Awal said in the next quarter, Ghana expected to increase tourist arrivals in the country to GH¢250,000.

The minister said the ministry was poised to work with the private sector and relevant stakeholders to make the tourism sector the most attractive in West Africa by 2024, and urged businesses in the sector to apply for the grant.

Dr Awal said an advertisement calling for grant applications would be placed in the dailies today.

The sites visited included the National Museum, the Museum for Science and Technology, the Jamestown Lighthouse, the Will Power Boxing Gym, the Ussher Fort and the La Pleasure Beach.

The visit was to ascertain infrastructural gaps at the sites and engage with the acting Director of the Ghana Museums and Monuments Board (GMMB), Mr Ivor Agyeman-Duah, on how to effectively market the various sites to attract tourists for economic development.

The minister was accompanied by his deputy, Mr Mark Okraku Mantey, and the Chief Executive Officer of the Ghana Tourism Authority (GTA), Mr Akwasi Agyemang.

The exercise was the latest to be undertaken by the ministry. Already, the minister and his entourage have visited tourist sites in eight out of the 16 regions.

The ministry is pursuing an initiative to establish “two iconic sites” in each region, while making the sites more competitive.

At the National Museum, where official cars used by past Heads of State and Presidents are parked, the minister suggested that the cars, some of which were in good shape, would be made available to tourists and the public for rental.

Again, he asked Mr Agyeman-Duah to draft a strategic plan in order to complete and make the National Gallery fully operational by October this year.

Mr Agyeman-Duah said the facility, when completed, could generate $20,000 monthly.

At the Ussher Fort, where the country’s first Prime Minister, Dr Kwame Nkrumah, and a former President, Mr John Agyekum Kufuor, had once been incarcerated, Mr Agyeman-Duah said the facility had been refurbished and fitted with vestiges of slavery and other historical artefacts.

The project was funded by the government of The Netherlands through the United Nations Educational, Scientific and Cultural Organisation (UNESCO), he said.

Mr Agyeman-Duah said the facility would focus on promoting tourism in the region for the ultimate development of the economy.

At the La Pleasure Beach, the management and staff of the beachfront recreational facility held a brief meeting with the minister and his entourage on how to transform the resort into a model beach.

Mr Agyemang said his outfit was working closely with the ministry to reopen beaches, stressing that the management of the various beaches would ensure the observance of the COVID-19 protocol.

“For the beaches to be opened, you have to observe the protocol,” he said.

Speaking on plans to make the resort a masterpiece, he said the master plan, which will be developed with the management of the beach, would address issues of employment for indigenes within the community, tenancy agreement, refurbishing existing structures, as well as safety and environmental issues in order to generate the desired results for the community and the country.

“We will come and sit down with you on the protocol because this will be the model beach from which other beaches will learn,” Mr Agyemang said.