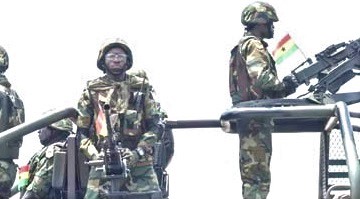 On Sunday, August 21, 2022, members of the Ghana Military Academy (GMA) Regular Career Course (RCC) 32, and their spouses worshipped at the Garrison-Methodist-Presbyterian-Church (GMPC), Burma Camp, at a Thanksgiving Service to commemorate the 30th anniversary of their commission as officers into the Ghana Armed Forces.

Some immediate questions were:

•What is Regular Career Course (RCC)?

This reminded me of Nana’s constant strong suggestion that the Armed Forces Directorate of Public Relations (DPR) must embark on a programme to educate Ghanaians on the Armed Forces and our role in society. This is based on his observation that most Ghanaians know very little about the military.

Unfortunately, the little they know/believe is negative, based on our history of coup d’états and misbehaviour of a few bad lots.

Before answering the questions, I will restate part of the CDS’s message to the celebrants of RCC Intake 32.

In an address read on his behalf by the Chief of Staff, General Headquarters (GHQ, COS,) the CDS reminded the officers of the Military’s Honour Code which states:

• The safety, honour and welfare of your country come first, always and every time.

• The honour, welfare and comfort of the men you command come next.

• Your own ease, comfort and safety come last, always and every time.

They have subsequently been adopted and adapted by Commonwealth militaries as the “Chetwode Motto.”

The officers of Intake 32, who are mainly Colonels with a few One-Star Generals (Brigadier-Generals and equivalents in the Navy and Air Force), were reminded of the important role they play in the Ghana Armed Forces in support of Ghana’s security. So, what does RCC Intake 32 mean?

Before Independence in 1957, most West African officers in the British colonies did their initial cadet training in the Gold Coast/Ghana before proceeding to the UK for further training and commissioning as officers. Thus, cadets from Ghana, Gambia, Nigeria and Sierra Leone did a preliminary course at Teshie, Accra.

As part of his “Ghanaianisation” policy, the then Prime Minister, Osagyefo Dr Kwame Nkrumah decided Ghana would train its own officers in the newly established Ghana Military Academy, starting from 1960. After 18 months’ training, the first batch of cadets was commissioned in September 1961 as INTAKE ONE.

Subsequently, on the average, Ghana has commissioned cadets annually. The intakes have been numbered progressively after Intake 1.

The most recent batch was commissioned in August 2022 as Intake 61.

The Regular Career Course (RCC) designation is a later addition to differentiate regular career officers from those who join with a profession like doctors/nurses, engineers, teachers, lawyers, etc.

The latter are designated “Short Service Commissioned/Special Duty officers”. They do an abridged version of the regular career course.

Officers of Regular Career Course Intake 32 were commissioned Second-Lieutenants in August 1992 as the 32nd batch of career officers in the Ghana Armed Forces.

Leading the Thanksgiving Service, the Director of Religious Affairs/Chaplain-General of the Ghana Armed Forces, Rev. Commodore (Cdre) Paul Adjei-Djan, prayed for the officers and their families, as well as those who have been called to eternity.

All over the world, the military is one of the most respected state institutions. Indeed, at many airports I have flown from overseas, military personnel are given priority of boarding, and enter commercial aircraft with passengers flying first class. This is in recognition of their unique service to the nation by air, land or sea, even at the cost of their lives and that of others.

As a former Commanding Officer of mine put it, it is the only institution where one swears an oath “to leave home vertically (alive) in the morning, and return horizontally (dead) in the evening!”

It is against this backdrop that the last British CDS of the Ghana Armed Forces, Maj. Gen. HT Alexander, said in his 1961 book,

“The African Tightrope” that “Ghana will regret the day the army enters politics, or politics enter the army!”

As a career General, he believed in the Armed Forces being the epitome of Law and Order. In Aristotle’s words, “With law, the human is the best creature. Without law, he is the worst creature.”

Interestingly, some believe that if all Members of Parliament/District Chief Executives (MPs/DCEs) did a three-month military training before starting their Parliamentary/District duties, discipline would be instilled in them.

This, hopefully, will have a trickle-down effect on Ghanaians. Proponents cite, as example, the Scandinavian countries like Norway and Sweden, where military service is compulsory as National Service.

Regular Career Course Intake 32 was advised to live by discipline, integrity, respect for all, and to lead by example at all times.
They were exhorted to eschew disrespect/arrogance and always keep Field Martial Chetwode’s Military Honour Code in mind and serve Ghana, remembering the quote: “For God and country!” Leadership, lead! Fellow Ghanaians, wake up!