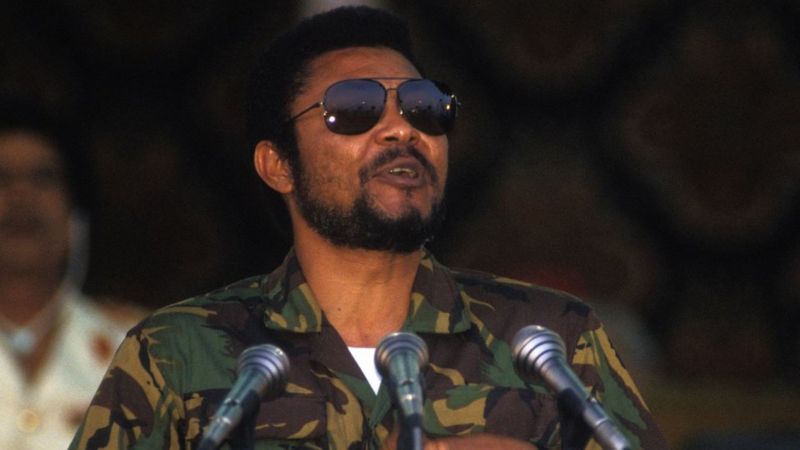 Ghana's longest-serving leader, former flight lieutenant Jerry John Rawlings, who died on Thursday, was an influential figure for a generation of people like me born in the late 1970s.

At the time he got involved in national politics, Ghana was in the throes of food shortages and a dire economic situation that had led to rampant inflation. People remember him for leading by example. When he showed up he got involved.

I remember watching him on the daily evening newscast on black and white TV as a little boy.

Crowds turned out to hear him chastise the political elite for Ghana's economic stagnation, indiscipline and corruption.

He would fold up the prepared paper notes given to him by his aides and - with dramatic pauses and flourishes - speak passionately in English and one of many local languages, depending on the region he had been visiting.

People would be spellbound as he gestured, swayed his body, growled, and sometimes joked while emphasising his key message of ending rife indiscipline and corruption.

More recent footage shows an older statesman standing in a street in the capital, barking orders at disorderly drivers who flouted traffic rules during a gridlock.

In his 30s he was tried in 1979 after leading a failed military coup and was asked why he did it. The young officer gave a response that further boosted his popular appeal.

"I know what it feels like going to bed with a headache, for want of food in the stomach."

"Probity, transparency and accountability" were buzzwords he used frequently to describe the standard he expected from public officeholders.

His critics argued that he fell short of these expectations. They accuse him of human rights abuses, including the execution of three former heads of state and army generals accused of economic sabotage, abuse of power to amass wealth and misuse of state funds.

The orphaned families of supreme court judges and others who were executed by firing squad remember that era with pain and anguish.

Political opponents also accused his administration of being intolerant of dissent, while human rights campaigners were outraged at the arrest and imprisonment of opposition leaders.

He is credited with stabilising Ghana's turbulent politics and economy in the late 1970s and leaving a legacy of democracy after 20 years. His critics, however, blame him for the instability which followed his 1979 coup.

As news of his passing sinks in, Rawlings is being remembered as one of few African statesmen who never lost touch with the common man.

His random public appearances, where he would be mobbed by cheering crowds on the streets, and his strong convictions about ending unfairness in society are an abiding tribute to his memory.

The fact that he died at a public hospital when African leaders of his stature typically fly abroad for urgent care also speaks to the legacy of Flight Lieutenant Jerry John Rawlings as a man of the people.