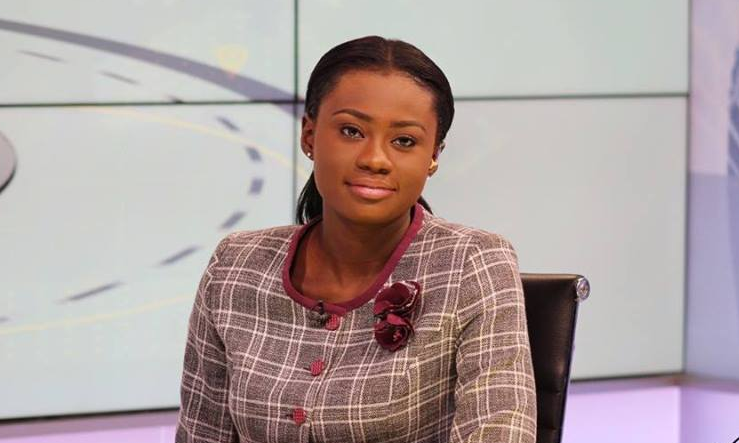 Television evolves, so do its personalities who host talk shows or read the news. Many faces and personalities who graced our local stations for years have left the airwaves, or reduced their on-air roles, yet we get new faces all the time who come with a brand new energy.

One of such new faces who is soaring to greater heights is Natalie Fort, a pretty young lady who cut her teeth in the media barely two years ago with TV3 Network.

Ms Fort landed her job without any experience or training in journalism or news anchoring in October 2015. She was made an anchor for the network's five-minute on the hour news bulletin, News in Brief, and was also selected as the anchor for the 15-minute Business News segment on TV3's breakfast show dubbed New Day.

Having endeared herself to viewers within this short period, she was honoured with the Excellent Personality Merit Award for August 2017.

Ms Fort has within a year-and-a-half risen from presenting TV3’s News in Brief to become one of two faces of the station’s prime time news, News360, at 7 p.m. daily on weekdays.


She came tops among hundreds of radio and television presenters appraised by Premiere Brands Ghana, an independent organisation that seeks to inspire wealth creation in Africa through the growth of successful brands. Premier Brands collates results through months of intense research.

A citation accompanying the award read: “On the basis that you have been unique as a news anchor, appeared very well dressed and dynamic on TV screen, well appreciated and admired by the audience, well composed, Premier Brands Ghana is excited and proud to honour you with the Excellent Personality Merit Award for August 2017.”

Ms Fort received the award from Mr Eric Affaidu, CEO of Premier Brands Ghana, and expressed gratitude to God for the honour as well as those who realised her potential and gave her the opportunity to become who she is now.

“I’m grateful. I’ve not been doing this for too long; for about a year and a half. We continue to grow and continue to watch those who’ve done it before and learn,” she said as she received the award.

Mr Affaidu observed that for every brand there are individuals who always work behind the scenes to make it successful, so Premier Brands decided to award such individuals who are making brands grow.

He added: “The way Natalie is confident on screen has made the audience appreciate her.

He said Ms Fort scored very high among other radio and television presenters in the country, “so we need to let TV3 know that there’s a personality here whose image is also building up, which is good for the brand.”

Ms Fort describes herself as a Television Personality, Corporate Ambassador, Entrepreneur and Philanthropist. She is a News Planning Journalist at TV3 Network's News and Current Affairs department.

It is often said hard work pays extensively. Within a short while, Ms Fort has been promoted to solely anchor the Midday News Bulletin, Midday Live every weekend during which she conducted interviews on topical issues such as the setting up of a Railway Ministry by the newly elected New Patriotic Party (NPP) administration led by President Akufo Addo, and the political tension surrounding the Gambia, following the election of President Adama Barrow.

In less than a year, Ms Fort was selected to co-anchor News 360; the network's leading News Bulletin every weekend at 7 p.m. This she co-anchors alongside some of Ghana's seasoned male news personalities, such as Abu Issa Monnie and Paa Kwesi Asare.

She currently serves as the female anchor of the News 360 Bulletin every weekday; together with Journalist and Anchor, Alfred Ocansey. Besides, she also hosts Business Daily on TV3's sister station, 3FM, 92.7 on weekdays.

Ms Fort is a product of the Ghana International School, Merton International, the Royal Academy of Music and the Accra Film School, where she studied television presentation and script writing.

The young anchor who is always smartly dressed loves cute jewellery such as diamonds.

She also loves good perfumes on her body to complement her looks.

When she is not on air she loves to watch CNN. “I think CNN shows are catchy. With radio, I like listening to the BBC and 3FM,” she added.

The kind of man Ms Fort would have to go out should be a Christian. “Not just a Christian but he should have a true relationship with God and must take his spiritual life seriously. In addition to that, he must be motivated.

I really hate men who are not motivated and what I mean by not motivated is that they are not ambitious and are very comfortable where they are. I have seen men like that before. I like someone who is ambitious and wants to achieve something great,” she revealed.

Ms Fort’s involvement in the Fashion and Modeling industry since the tender age of 13 made her set up the Fort Model Management, company setup with the aim of 'Redefining the art of Modeling' in Ghana, Africa and the world, through the injection of innovative services and skills development.

She was nominated to represent Ghana in the Miss Princess World Competition in the Czech Republic in 2011.

Give Ms Fort ‘Red Red’ (Gari and beans) any day and she will jump for it.