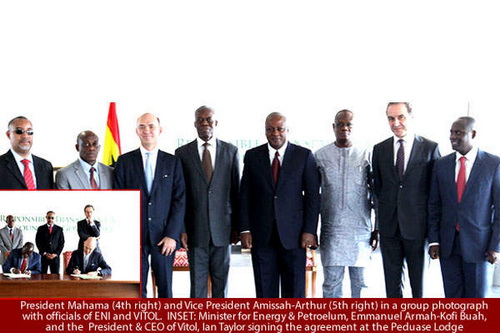 Flashback: A group photo of officials (government and Operators) at the signing ceremony in 2015.
30.5k Shares

Ghana has from October 2018 begun the monthly forfeiture of $40 million to Eni Ghana, as a result of the country’s failure to put in place appropriate infrastructure to off-take gas from Offshore Cape Three Point (OCTP) for the use of thermal plants.

OCTP, operated by Eni Ghana, commenced operations in mid-2018, and has an agreement to produce the lean gas for onward off-take by the government of Ghana.

Unlike crude oil and liquefied petroleum gas (LPG) which are storable and could be transported to the international market, lean gas is not. Therefore in developing a natural gas field, the investors (OCTP Partners) had to be assured of a ready off-taker (Ghana), a ready market and guaranteed repayment.

The OCTP is operated by Eni Ghana as the lead operator with a 44.44 per cent interest, along with its partners Vitol Ghana with 35.56 per cent, the National Oil Company (GNPC) with 20 per cent.

Between the operators and Ghana, before the gas hit the shore, it requires infrastructure (pipeline) to transport the gas from the wellhead, through processing units and the delivery of the agreed volume to the off-taker (Ghana) for thermal energy generation.

Take-Or-Pay
Such infrastructure per the industry standard, should have been ready and pre-commissioned one clear year before the completion of the development and production of the Sankofa field.

However, since the commencement of gas production at the Sankofa field, the country has not been able to take the volumes of gas delivered to the shore by the partners, triggering off the Take-or-Pay clause in the OCTP oil contract.

The investment of more than $7-billion into the development of OCTP, which is a heavy, gas concentrated field project touted as a great relief-to-be for the country’s challenged power sector, was occasioned by Ghana.

In 2015, the Government of Ghana signed the deal with the Italian oil giant, ENI and partners for the production of about 180 million cubic feet of gas for which Ghana was expected to prepare adequately to receive and utilize or pay for the agreed volume of gas even when the country is unable to consume it all.

The signing ceremony
The signing came after the negotiating team made up of officials of the then Ministry of Energy & Petroleum, Ministry of Finance, the Ghana National Petroleum Corporation (GNPC) and ENI Exploration, operators of the block, concluded talks to allow ENI to commence the production of gas.

Progress since the happy signing however, has been anything but progressive, leading to Eni’s activation in October of the Take or Pay clause since Ghana has not been able to flow the gas to Tema.

Negotiations for a reverse flow through the existing marine pipeline of the West Africa Gas Pipeline Company (WAGPCo) between Tema and Takoradi commenced later but had been saddled in commercial disagreements until the end of last month when an agreement was reached to transport the gas at the cost of $2.1.00 per MMBTU.

That aside, the construction of metering and work on the tie-in both in Tema and Takoradi are yet to be completed, making it difficult for the Sankofa gas to be transported to Tema to feed the plants to the east.

Currently, the thermal units at the Volta River Authority’s (VRA) power enclave including independent power producers (IPPs) to the West in the Shama District cannot consume the entire volumes estimated at more than 300mmscf made up of the foundation gas from Jubilee and the commercialised gas from TEN as well Sankofa OCTP gas.

Capacity of plants to the West
The plants at Aboadze at the moment have the daily requirement of a little over 150mmscf. However, the projected 180mmscf expected from Sankofa and additional 120mmscf from Jubilee as well as over 70mmscf from TEN are way beyond the daily requirement of Aboadze, hence the urgent need to connect and transmit the gas to Tema where many IPPs are struggling to get fuel for their daily production.

The Daily Graphic’s sources at the off-taker –VRA and the Ghana National Petroleum Corporation confirmed that in October this year the partners on the OCTP project were left with no option than to trigger the Take-or-Pay clause in the contract.

This they explained, was to protect the commercial interest of the investor (the partners) and ensure the payment schedule for the project was not disrupted.


Take or pay, no Father Christmas
The “Take or Pay” in the oil contract means that Ghana contracted the volumes of gas which the country must be ready to take and pay – therefore Ghana’s inability to off-take the volume is not the business of the investor.

The sources indicated that, much as oil companies operating in the country wish to adopt good corporate citizens posturing, are unfortunately not “Father Christmas”, and want returns on their investment.

“The development of the natural gas field is not an easy task and very expensive, therefore, the one who called for the investment (Ghana) must be ready to take”, explained a source.

The source hinted that the operator of the field proposed to carry out a bypass to ensure that volumes are shipped to Tema while works on the tie-in and the metering station continue, however, WAGPCo disagrees.

It blamed Ghana for not ensuring that while they signed the agreement, and allowed Eni to commence production, the country was also getting ready for the process, saying it is sad that due to poor planning, Karpowership is yet to be transported to Sekondi while works onshore and laying of marine pipes are yet to commence.

Tie-in & metering station
Daily Graphic’s checks indicate that at Aboadze, the tie-in process and the construction of the metering station are about 80 per cent complete, while the Tema end is about 30 per cent.

The projections are that, work on the tie-in would be completed, both in Tema and Aboadze by the middle of the third quarter of 2019, meaning that till then, the country has to continue paying for the agreed 180mmscf.

The implications for the current state of affairs are obvious - the plants in Tema which should have been using the gas will continue to be fed with fuel at an additional cost.

Going forward however, Ghana is expected to invest in its own gas-pipeline infrastructure linking up all thermal enclaves to ensure that disagreements in cost of transportation will not lead to the country being held to commercial ransom.

In August 2017 first oil flowed from the field with peak production estimated at 80,000 barrels of oil equivalent per day, while initial gas commenced in June 2018 and gradually ramped up to the foundation volume of 180mmcf.

Political leaders past and present projected it to be a robust integrated oil and gas project that will provide the reliable energy source needed to accelerate the economic growth of Ghana.