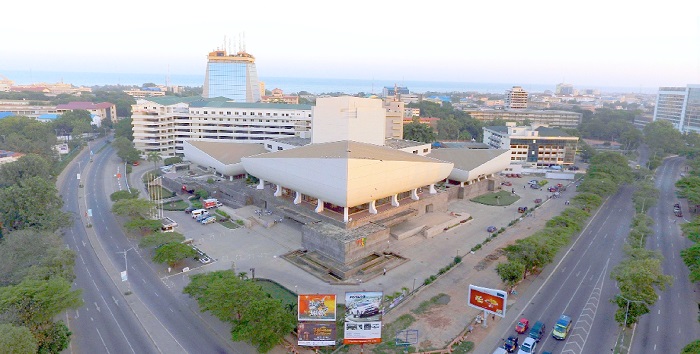 The National Theatre complex sited near the junction of the Independence Avenue and Liberia Road, was constructed in the early 1990s to spearhead the theatre movement in Ghana.

The ship-like structure, built by the Chinese and located in the Victoriaborg district in Accra, became the landmark building in the national capital.

It serves as a venue for concerts, dance, drama and musical performances, screenplays, exhibitions and other special programmes.

In Ghana, theatre as an artistic form has existed for centuries in the traditional dramatic expressions of society, however, the National Theatre Movement was conceived around the time of Ghana's independence in 1957 to help remould the new nation's cultural identity.

In July, 1989, the Government of Ghana signed an agreement with the government of People’s Republic of China for the construction of a National Theatre Complex.

Actual construction work on the National Theatre commenced in March 1990 and it was completed and officially handed over to the government on December 30, 1992.

Operations started with a performance by the three resident groups, namely Abibigromma, Ghana Dance Ensemble and the National Symphony Orchestra. This was followed by a performance by a Chinese Cultural Troupe.

The complex structure has a total building area of 11,896 square metres. It comprises 1,500 seats in its auditorium, an exhibition hall, a rehearsal hall and an open-air theatre.

The main structure is constructed with reinforced concrete and burnt bricks with the lower parts of the exterior laid with polished granite and the upper curved parts decorated with mosaic tiles. The frontage is adorned with a three-tier water fountain which also doubles as a reservoir for the Theatre’s internal fire hydrants and the compound embellished with a number of African sculptural pieces nicely displayed on some of the lawns.

Acclaimed by architects around the world, the structure was also captured in the Phaidon Atlas of 20th-Century World Architecture, compiled by the Union of International Architects (UIA), published in 2012. The publication provides an overview of the finest built architecture from around the world completed between 1900 and 1999.