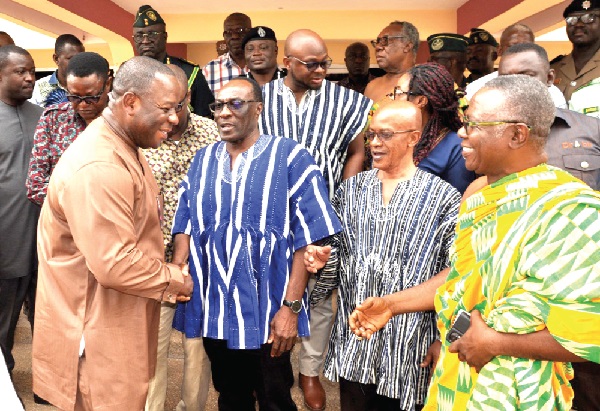 Lord Commey (left) interacting with Togbe Teprehodo (3rd from right) and other members of the VRHC
30.5k Shares

The venue will be the 5,000-capacity Ho Youth Resource Centre (located at Adaklu Tsrefe).

He said the decision was taken by the President, Nana Addo Dankwa Akufo-Addo, to market the rich and vast cultural and tourism potential of the Volta Region to the rest of the country and the outside world, and boost the area’s local economy.

Mr Commey, who is Chairman of the National Independence Day Celebration Planning Committee, was accompanied by heads of various security agencies and officials from the Office of the President, Ministry of Education and Ministry of Foreign Affairs.

“The Independence Square in Accra alone can no longer take up this key national event,” he said.

He appealed to the traditional authorities to support the celebration and make it a grand success.

The President of the VRHC, Togbe Teprehodo IV, thanked President Akufo-Addo for choosing the region for the celebration, and gave an assurance that the VRHC would throw its full support behind the celebration and make it an unmatched event in the history of the country.

Later in the day, the delegation, which included the Volta Regional Minister, Dr Archibald Yao Letsa and the Chief Executive Officer of the National Youth Authority, Pius Hadzide, inspected the venue where work on the field, stands, tracks, and other features were going on vigorously.

The contractors, Wilkado, gave an assurance that the place would be ready well ahead of the celebration.

The delegation also called at the Asogli Palace at Ho-Bankoe, and the Adaklu Traditional Council at Adaklu-Abuadi, to brief the chiefs on preparations towards the celebration.

At the Asogli Palace, the Warlord of Asogli, Togbe Adzi Lakle Howusu XII, said it was an honour for the Volta Region to host the event.

The choice of the region by President Akufo-Addo for the national celebration bore ample testimony of the importance he attached to the region, Togbe Howusu added.

President Akufo-Addo is expected to take part in the celebration which will feature air shows, spectacular military drills, cultural displays and a parade by contingents from the various security agencies and selected schools.