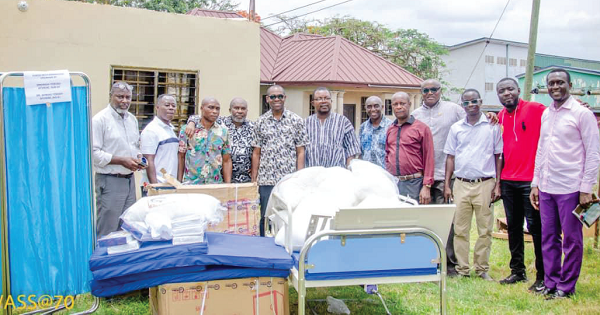 The 1978 year group of the Opoku Ware School has expanded and renovated the school’s sick bay as part of its contribution to the development of the institution.

This followed a visit to the school by members of the group during the celebrations of its 70th anniversary.

According to the spokeperson of the group, Dr Akwasi Yeboah-Afihene, when they entered Opoku Ware School in 1978, they met the sick bay which was then renovated by the 1971 year group some years back.

He said the students population was not even up to thousand as compared to now, which was 4,000 using the same old facility.

“The pressure on the facility is not from the increase in students population alone as the facility also houses the National Ambulance Service of Nyiaeso and Kwadaso Constituency and its Medical team.

“So you can see the need for a new facility. It was after we received this that the global 1978 year group raised GH¢225,000 about $30,000 to build this néw edifice. After completion we were happy to have Jeremiah Yeboah- Afihene a Son of Katakyie Dr Akwasi Yeboah-Afihene (AD 14) one of our mates to raise GH¢37,500 about $5,000 to buy 10 hospital beds and a lot of hospital accessories to equip the facility,” he said.

He expressed gratitude to members of the group, the headmasterl, Father Owusu Skyere, old students and President Katakyie Mike Adu Domfeh among others for their respective roles.