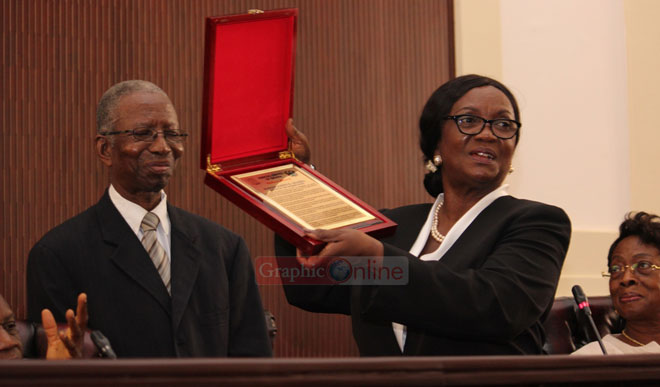 One of Ghana’s legal luminaries, Mr Justice Joseph Bawa Akamba, was yesterday honoured by the Judicial Service at a ceremony at the Supreme Court in Accra. Mr Justice Akamba served as a justice of the apex court from November 2012 until his retirement last year.

In attendance at the ceremony were the Chief Justice, Mrs Justice Georgina Theodora Wood, some justices of the superior courts, the President of the Ghana Bar Association (GBA), Mr Benson Nutsupkui, lawyers and some officials of the Judicial Service.

Amidst rousing applause, Mr Justice Akamba was presented with a citation of honour by the Chief Justice.

The citation lauded the retired judge for his immense contribution to the country’s justice delivery system.

It read: “In recognition of your 40 years of invaluable contribution to the Judiciary and the Judicial Service, we present to you this plaque as a token of our deep gratitude to you as you retire honourably from the service.’’

Presenting the citation, the Chief Justice thanked Mr Justice Akamba for his dedication and commitment as a Supreme Court judge and for other duties in the Judicial Service.

She described him as a man of “integrity, sincerity and hard work’’.

“Justice Akamba has, over the years, served the Judiciary and the good people of this country selflessly. We, therefore, have to show our appreciation and honour him,’’ she said.

Some colleagues and other personalities also paid glowing tribute to the retired justice of the apex court.

A Justice of the Supreme Court, Mr Justice William Atuguba, described Mr Justice Akamba as a “frank and straightforward man with a good sense of judgement’’.

He described Mr Justice Akamba as a man with “an appetite for finding solutions to legal problems’’.

“The judiciary of Ghana has lost an excellent jurist through compulsory retirement,’’ he said.

He urged the retired judge to continue to share his knowledge and expertise with the Judiciary.

Mr Nutsupkui described Mr Justice Akamba as a humble man “who was hardly provoked by the utterances of lawyers in court’’.

He said Mr Justice Akamba was an approachable man who rarely showed his emotions while in court.

“He was very resourceful, generally friendly and very respectful to court users. He discharged his duty with fairness and decency,’’ he said.

In his remarks, Mr Justice Akamba attributed his long service in the Judiciary to the grace of God.

“I attribute my success to God. I am a clear demonstration of what God can do,’’ he said.

Mr Justice Akamba entered the Judiciary as a magistrate in 1977.

Through hard work and diligence, he rose through the ranks and gained promotion to the Circuit Court, the High Court and the Court of Appeal.

He reached the top of his career when he was appointed a justice of the Supreme Court by President John Dramani Mahama in November 2012.

Apart from his service, Mr Justice Akamba served in The Gambia as the Director of Public Prosecutions in 1994.

He was later appointed a Justice of the Court of Appeal in The Gambia.

Mr Justice Akamba also served as the Director of the Judicial Training Institute, a position he still holds.

He also served as the President of the Association of Magistrates and Judges, Ghana (AMJG).

In 2012, as a member of the AMJG and the Judicial Council, he was instrumental in the negotiations that led to the improvement in the conditions of service of judges.