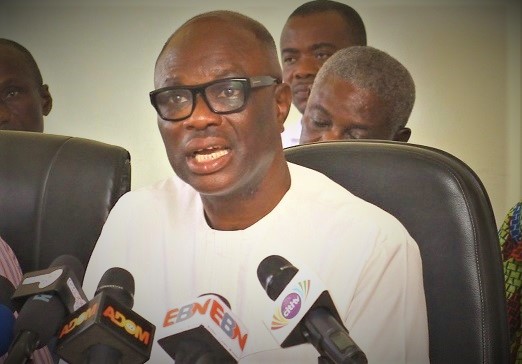 Members of the Ghana Union of Traders Association (GUTA) have resolved to close their shops in Accra for a day to protest against unfavourable government policies affecting their businesses.

The protest, scheduled for Monday, August 29, this year, is a measure by the traders to register their displeasure over policies such as the reversal of the flat rate to Value Added Tax (VAT) standard rate, increase in policy rate to 22 per cent, coupled with the depreciation of the cedi, and a rise in interest and inflation rates, among others.

The measure, according to the association, was to get the government to act swiftly to reverse the policies.

Addressing a press conference in Accra yesterday, the President of GUTA, Dr Joseph Obeng, said the unfavourable policies were inimical to the operations of traders.

“There have been a series of pressure and agitations coming from members of the trading community on the leadership of GUTA to register our frustrations and desperation to the government to appreciate the extent to which we are suffering as a result of the depreciation of the cedi and other economic issues.

“By the dictates of the trading community, we declare closure of shops in Accra on Monday, August 29, 2022, to officially demonstrate these concerns to the government,” he said.

Some of the members of the association who attended the press conference were clad in red attire and armbands. They intermittently shouted slogans to register their anger and displeasure at the policies of the government.

According to the president, the working capital of traders had now reduced to the minimum due to the depreciation of the local currency.

As a result, he said businesses were now finding it difficult to service their loans to banks, as well as honour their suppliers’ credit.

“We believe that with the mandate and resources given to the government to manage the economy, it can turn things around.

We, as members of the business community are ever ready to avail ourselves to help the government in its quest to find solutions to these myriad of problems”.

“We do not subscribe to the notion that the situation has gotten out of hand,” the president said.

Dr Obeng said in the short to medium term, the government must inspire hope and confidence in the system through an appropriate policy direction that would improve productivity, find means to inject foreign exchange into the system and also control the excessive demand for foreign exchange in the country.

He said industrialisation and increase in productivity, especially in the agricultural sector for local consumption and for export, was the surest way to develop the economy.

“This will require extensive and continuous sensitisation and education of the public, which should focus on patronage and exportation of our local products,” the president added.

According to him, the country had its own geographical staple foods in abundance but needed to add value, improve packaging and storage to become self-sufficient.

He further called for the needed investment laws that would attract investors to the productive sectors of the economy.

“Priority in terms of foreign exchange and incentives should be given to traders who are also into export,” Dr Obeng added.
He said GUTA had started engagement with the Ghana Export Promotion Authority for information to enable its members to export to their import destinations.

“We are also not oblivious of the fact that there are global challenges with regard to the COVID-19 pandemic, as well as the Russia-Ukraine war, which the country is no exception in these global phenomena.

“One thing we need to clearly understand is that issues regarding the pandemic have become a new normal worldwide, likewise the war, which has no end in sight,” the president added.