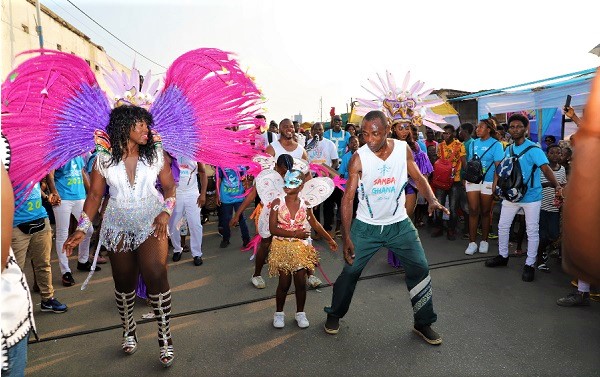 A dance group performing on the street of Jamestown during the Chale Wote festival. Picture: GABRIEL AHIABOR
30.5k Shares

Scores of patrons of this year’s Chale Wote Street Art Festival were treated to various performances by local and international artistes last Sunday to climax the festival in the Ga Mashie area in Accra.

The Zangbeto and the Egungun groups from Benin prominently featured in the exciting performances that lasted for about an hour at the Osekan Park.

Revelers were also thrilled by the Samba Ghana group which earlier embarked on a street procession before mounting the stage to perform.

There was also a performance by the Global Pan African Dance Group for about 30 minutes, with the seven men showing their bone flexibility that wowed the audience with acrobatic dance moves.

The Zangbeto dance depicts the traditional voodoo (sorcery and spirit possession) guardians of the night among the Ogu or Egun people of Benin, Togo and Nigeria.

It is believed the Zangbeto dance emanated from a cult that is charged with the maintenance of law and order, and ensures safety and security within Ogu communities.

Its performers wore a scary Zangbeto costume, a covering made from an intricate mass of tiny strands of hay, raffia or other threadlike materials.

The performance was even more scary as the costume appeared to rise by itself and danced rhythmically to drum beats.

On one occasion, when the costume was opened, a white dove appeared beneath it, and on another occasion, a wood carving was shown to the crowd by one of the Zangbeto group members.

Similarly, the Egungun dance by the Beninois provided an exciting moment.

It was a masquerade performance accompanied by the swirling of brightly-coloured fabrics, augmented by intricate body movements and carefully orchestrated dance steps.

The dance moves were supposedly a visible manifestation of the spirits of the departed ancestors who periodically revisited the human community for remembrance, celebration, and blessings.

These spirits constantly bless, protect, warn, and punish their earthly relatives depending on how their relatives honour them.

Samba is a lively dance of Afro-Brazilian origin danced to the samba music.

The Samba Ghana group, mostly women, were dressed in an eye-catching bikinis, with a large and elaborate head piece.

Earlier, the Frankie and the Band Parade started the performances with their first song “Welcome home", originally produced by the Osibisa Band, before adding Samini's “My Own".

There were other performances like the cow dance by the Kake Dance Ensemble.