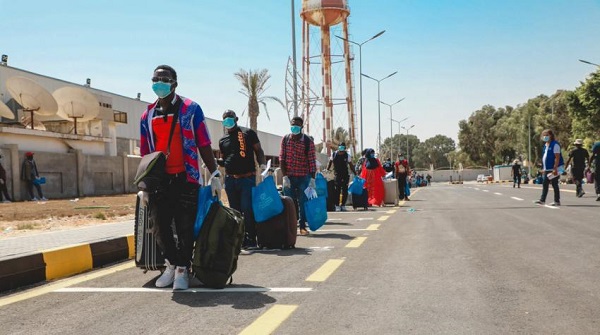 THE Queen Mothers Foundation of Ghana has called for a stronger collaboration among stakeholders and the Ghana Immigration Service (GIS) to sensitise and enlighten young persons to current migration trends.

The foundation said this would mitigate the increasing migration threats and how unsuspecting young people were being lured with promises of greener pastures outside Ghana, only to be caught in dangerous and challenging conditions.

The President of the foundation, Nana Ama Serwaa Bonsu, made the suggestion when she led a delegation of the foundation to call on the Comptroller- General of the GIS, Kwame Assuah Takyi, at his office in Accra.

The meeting was to discuss how the two organisations could collaborate to bring such education to the communities.

The Queen Mothers Foundation is an establishment that advocates the empowerment of the marginalised and the underprivileged, and seeks the welfare of particularly the youth and sick in their communities.

Nana Serwaa Bonsu said while migration provided exposure, experience and opportunities, it posed danger when not done legally and sometimes ended up being “even death traps for migrants”.

“Unfortunately, many young people in search of opportunities are not aware of these dangers and are so quick to jump on any chance to travel without considering the consequences,” she added.

An executive of the foundation, Nana Kobiwa-Akwa III, said her experience on travelling to many parts of the world had helped to shape her perspective on the job descriptions of immigration officers.

“My experience as a traveller has helped me to appreciate the transformation the GIS has seen in recent years,” she said.

Nana Serwaa Bonsu also bemoaned the deviant activities of some foreign nationals in Ghana, which he said continued to cause friction and unrest in their communities.

Mr Asuah Takyi noted that the roles played by queen mothers could not be over-emphasised, especially in helping citizens to understand and appreciate the work of the GIS in keeping communities secure and urged the group to help to educate their communities on the importance of sharing relevant information with officers when necessary.

He said there was the need for a greater collaboration among stakeholders to ensure that young people were well-informed about the risks involved in illegal migration and signing on to unverified programmes just for the opportunity to seek greener pastures.

He assured the queen mothers that the GIS would continue to work with traditional leaders since they also had influence on communities.

The Comptroller General highlighted some of the challenges the GIS was currently facing, but assured the queen mothers that their concerns that fell under the remit of the service would be given the needed attention.