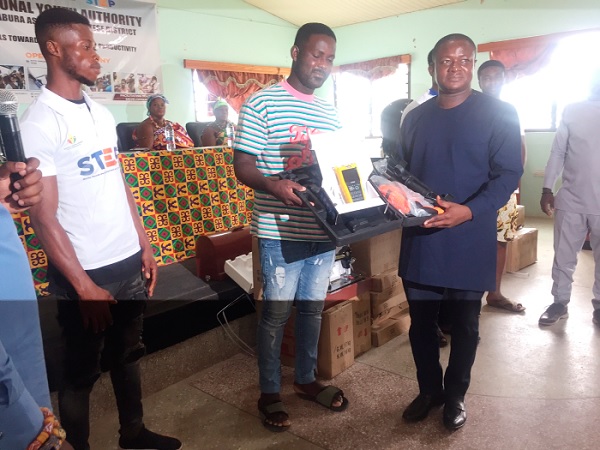 Beneficiaries of the government’s skills training programmes have been to urged to eschew laziness in order to impact their lives, families and communities.

The Deputy Chief Executive Officer of the National Youth Authority (NYA), Nelson Owusu Ansah, said some of the beneficiaries of such programmes had failed to fully take advantage of the opportunities to impact their lives and communities, making such efforts and investment to go waste.

At a ceremony to hand over tools to 20 beneficiaries of the Skills Towards Employability and Productivity (STEP) project in Abura Dunkwa in the Central Region last Friday, he said there were instances where beneficiaries of such programmes sold tools and equipment given to them under such skills development projects, stressing that this was a worrying phenomenon that derailed efforts at reducing unemployment.

The project is being implemented by the NYA at Abura Dunkwa in the Abura Asebu Kwamankese Disitrict (AAK).

In all, 1,500 beneficiaries from 30 districts are expected to be trained under the project across the country.

There are three beneficiary districts in the Central Region, namely Assin North, Assin Central and AAK.

The STEP project allows beneficiaries to select vocations of their choice.

It takes care of their apprenticeship fees and also presents them with equipment and tools for training.

The beneficiaries in the AAK district would learn vocations such as hairdressing, cosmetology, digital satellite television installation and repairs and sewing.

He noted that government, apart from the Free Senior High School policy and the development of vocational and technical education in recent times, was also making efforts to get other youth equipped with skills.

The Member of Parliament for the area, Elvis Donkor, said the community and parents of the beneficiaries had been involved in the effort to ensure effective monitoring of the programme.

He advised the beneficiaries to focus and concentrate to complete their apprenticeship and to support the training of other young ones in their communities.

He said he had also initiated similar efforts to get the youth to earn decent incomes.

The Chief Executive for AAK District Assembly, Willyevans Obiri-Awuah, advised the beneficiaries to ensure that the investment in them did not go waste.

A beneficiary, Victor Nyarko, said he was taking jobs as a labourer on people’s farms to survive, and that he was committed to improving his life by completing his apprenticeship.

Another beneficiary, Josephine Sam, also expressed gratitude to the government for the intervention.