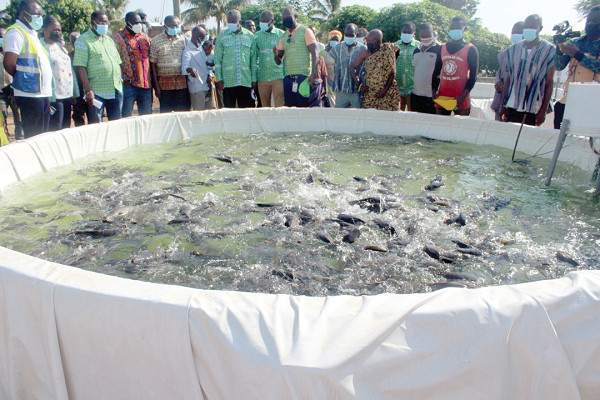 The Bui Power Authority (BPA) has handed over fishponds to 39 groups of 117 project affected persons (PAPs) at Bui, a resettlement community in the Banda District in the Bono Region.

The beneficiaries of the 54 fishponds are part of the 815 eligible people expected to benefit from the second phase of the BPA’s livelihood enhancement programme (LEP) estimated at GH¢4 million.

In addition to the fishponds, constructed at a cost of GH¢850,939, the BPA also presented operational tools and equipment, including personal protective equipment (PPE), to the beneficiaries.

The presentation is part of the LEP, which is being implemented to improve the quality of life of people affected by the construction of the Bui hydroelectric project.

The fishponds are stocked with either catfish or tilapia fingerlings, depending on the choice of a beneficiary and the capacity of a pond.

Per an agreement with the PAPs, three people are to manage a fishpond.

As of October 2021, a total of 526 out of the 815 eligible PAPs had been assisted to establish and operate their own businesses.

So far, the authority has expended about GH¢3,548,566 on the entire LEP initiative.

This came to light when board members of the BPA, led by the Chairman, Mr Kwasi Ameyaw-Cheremeh, visited a pottery and bag-making centre, a LEP II facility in the Bui community, to interact with both trainers and trainees.

The centre is training and providing beneficiaries with start-up to enable them to build ceramic products such as flower pots, ‘Ayowa’, fufu bowls and bricks with clay, including the production of a variety of bags.

The centre has so far trained and equipped 80 PAPs in bag-making, while 10 people are currently undergoing training in earthenware manufacturing.

The beneficiaries are settlers from seven communities with a total population of about 1,216 people affected by the construction of the Bui hydroelectric project.

Speaking to the media after handing over some fishponds to the beneficiaries, Mr Ameyaw-Cheremeh said the implementation of the business modules for the people was a good initiative, adding that the BPA would implement more of such projects to support the PAPs to live meaningful lives.

He also said the board would take a decision on a request made by the beneficiaries for the construction of more fishponds.

He thanked the chiefs and the people of the area for accepting to move from their previous settlements to pave way for the establishment of the Bui power station.

For his part, the Chief of Bui, Nana Kojo Wuo, expressed appreciation for the level of support the communities continued to receive from the authority to improve on their living standards.

He, however, appealed to the government to speed up the lands compensation processes.