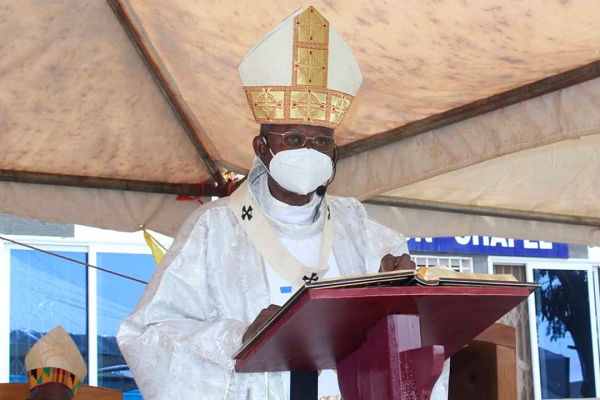 The Most Reverend Philip Naameh, the Metropolitan Archbishop of Tamale, addressing the parishioners of the OLA Cathedral

Lesbianism, Gayism, Bisexual, Transgender, Queer and related acts (LGBTQ+) are inimical to Ghana’s culture and values, the Metropolitan Archbishop of Tamale, the Most Rev. Philip Naameh, has said.

He has, therefore, urged the public, especially Christians, to pray against the practice of such acts, while entreating the church to stay united against its acceptance in the country.

The Most Rev. Naameh, who is also the President of the Ghana Catholic Bishops Conference (GCBC), was speaking at the 75th anniversary of the Our Lady of Annunciation (OLA) Catholic Cathedral Parish in Tamale in the Northern Region, which was climaxed last Saturday.

The anniversary, which was officially launched in 2017 with a series of activities, was on the theme: "We walk by faith and not by sight (2 Corinthians 5:7)”.

The church was established in 1946 by a Canadian Parish Priest, Rev. Father Remigius McCoy.

The Most Rev. Naameh advised members of the Catholic Church to live lives worthy of emulation to impact positively on society.

He also called for harmony at all times, saying “peace is not necessarily the absence of war; peace is needed in our homes, families and between spouses, parents and children”.

He further admonished Christians to eschew negativity in their lives to help make the world a better place for all, adding that it was necessary for them to live by faith to deepen their relationship with God.

As part of the activities marking the anniversary, the Most Rev. Naameh cut the sod for the construction of a two-storey building to serve as a commercial facility to help generate revenue for the cathedral.

The Chairman of the Anniversary Steering Committee, Mr John Yakubu Fusheini, entreated the congregation to offer support for the timely completion of the project.

The Chief Director of the Northern Regional Coordinating Council, Alhaji Alhassan Issahaku, commended the Catholic Church for its contributions to the development of the country through the provision of schools, health facilities, peace-building initiatives, among other such forms of support. 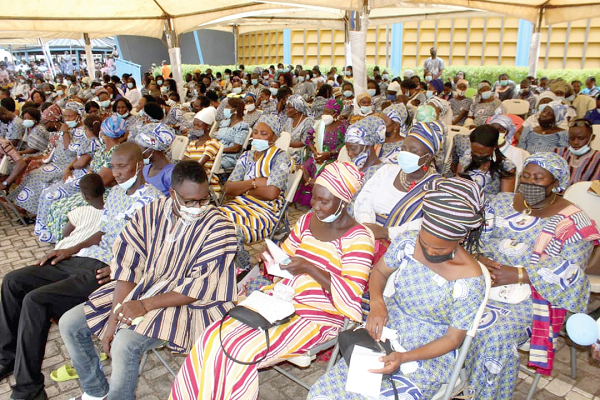 Five persons were conferred with Papal awards — the Order of St Gregory — for their dedicated work to the church over the years.

They are Mrs Cecilia Asobayire, Messrs Philip G. Afulang, Alfred A. Ndago and Clement Akapame, all of the Navrongo-Bolgatanga Archdiocese, and Mrs Gabriella Doris Wumnaya of the Damongo Archdiocese.

The names of the male awardees will now be prefixed with Sir, while those of their female counterparts would go by the prefix Dames.

Forty-five parishioners were also awarded citations for their dedicated services to the OLA Cathedral.

On behalf of his fellow awardees, Sir Ndago said the honour would further motivate them to work assiduously to promote the development of the church.