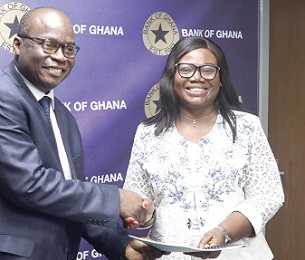 The Bank of Ghana (BoG) Board has approved the disbursement of a GH¢10 million grant to the Economic and Organised Crime Office (EOCO) to help strengthen the operations and investigations of the office.

Consequently, the central bank signed a memorandum of understanding (MoU) with the investigative body in Accra yesterday[August 15, 2022] to guide the latter in the disbursement of the fund.

The Governor of the BoG, Dr Ernest Addison, signed on behalf of the bank, while the Executive Director of EOCO, Commissioner of Police (CoP) Maame Yaa Tiwaa Addo-Danquah, signed for the organisation.

The money will be disbursed in two tranches.

The first tranche of GH¢5 million is to be disbursed immediately to augment EOCO's operations, especially with regard to investigations into the financial clean-up reforms.

Dr Addison said the chunk of the money would be used to investigate cases related to the financial sector clean-up exercise that started in 2017 and ended in 2020, during which eight banks, 23 savings and loans companies and more than 400 specialised deposit-taking institutions (SDIs) were collapsed.

He said the exercise brought to the fore the critical role of EOCO in uncovering financial crimes and ensuring that perpetrators were brought to book.

He said as part of the reforms, the central bank appointed receivers for the failed institutions and tasked them to secure the assets of the collapsed companies, liquidate same to defray debts and identify issues of malpractice that required extra investigations for prosecution and other accountability processes.

The Governor said among other things, the receivership process found that most directors failed in their fiduciary responsibilities to customers and other stakeholders.

According to him, the complex nature of the malpractice required that an expert body of investigators be brought in to unravel the matter through further investigations and deal with it.

He said the receiver of the specialised deposit-taking institutions transferred 100 properties to EOCO to investigate and ascertain ownership.

He said the assets comprised landed properties connected to micro-finance institutions (MFIs) that were affected by the exercise.

He said the EOCO investigations led to the issuance and reception of 88 freezing orders to allow for full-scale investigations into suspected activities by culprits.

Dr Addison added that EOCO’s assistance also led to the identification and recovery of traceable investments amounting to GH¢160 million.

“Also, about GH¢1.09 billion worth of related party transactions were forwarded to EOCO for further investigations,” he said.

He said EOCO investigated and forwarded 11 dockets to the Attorney-General’s Office for advice and possible prosecution, and expressed the hope that the grant support would further empower EOCO to conduct concrete investigations that could lead to the prosecution of perpetrators.

The Executive Director of EOCO commended the central bank for the gesture and pledged to ensure that the money was prudently utilised.

She said EOCO needed to be empowered to prevent the perpetration of economic and organised crimes and mentioned tax evasion and non-compliance as some of the challenges the office, if well resourced, could help address.