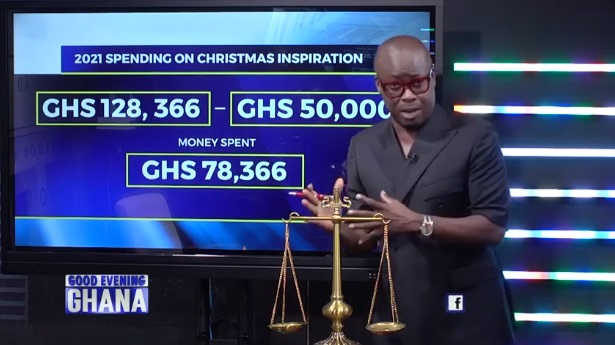 The Board Chairman of the Ghana Airports Company Limited (GACL), Mr Paul Adom-Otchere has disclosed that the GH₵128,366 that was spent on Christmas Inspirations last December at the Kotoka International Airport (KIA) had a GH₵50,000 cash sponsorship package by an advertising company.

As a result, Mr Adom-Otchere said of the GH₵128,366 that was spent on the Christmas decorations at Terminal 2 and Terminal 3, only GH₵78,366 came from the coffers of the GACL.

Speaking in a broadcast on Metro TV's Good Evening Ghana programme, which he hosts, Mr Adom-Otchere said the amount spent in 2021 was much lower than the GH₵126,012 that was spent on 'Christmas Inspirations' used in decorating only one terminal in 2016.

It will be recalled that Mr Adom-Otchere had in a Facebook post on January 7, 2021, stated that the four Christmas trees installed at the KIA cost a total of GH₵34,000 while the other decorations cost GH₵84,000 resulting in a total of GH₵118,000. He added that out of that total, GH₵ 50,000 was paid for via sponsorship.

On why his name was on the invoice

Responding to concerns about corporate governance at the GACL which related to why his name was on an invoice for some of the decorations, Mr Adom-Otchere explained that the said invoice which was widely circulated on social media was not used.

He added that his name was on it because he had personally requested to see the invoices to ensure that there was value for money.

He said: "This is the explanation. This is just an invoice and I'm happy to report that this invoice was not used. We didn't obey this invoice, we didn't use this invoice...".

He said conclusions that the cost captured on the said invoice was the cost of the inspirations were also false because invoices were just an expression of interest and not proof of purchase.

"The name was on the invoice because I requested that I need to see the invoices that the potential suppliers are sending to the company so that we can intervene and bring down the cost," he disclosed.