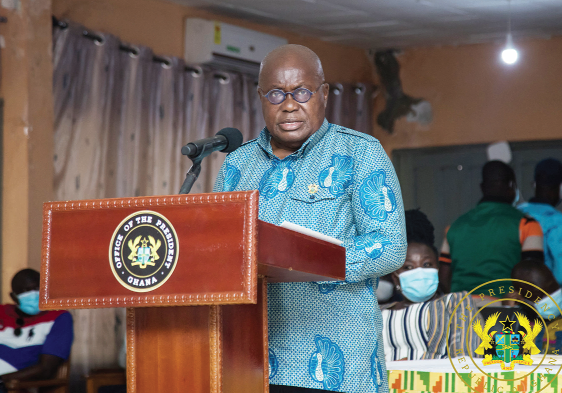 President Nana Addo Dankwa Akufo-Addo has said he will stay committed to ensuring that the Vigilantism Law does not become mere paperwork.

He said he would make sure that the law bit before, during and after the December 7 general election.

Addressing a durbar of the chiefs and the people of Nangodi in the Nabdam District in the Upper East Region as part of his two-day visit to the region last Wednesday, the President intimated that whoever breached the law would be dealt with accordingly.

“It is not going to be a law just on paper; it will be acted upon if anybody tries to breach the law. I have said to the security agencies and the IGP and the top hierarchy of the police that as far as the Vigilantism Law is concerned, I am colour blind,” he said.

President Akufo-Addo gave his assent to the Vigilantism and Related Offences Act, 2019 in September last year.

It states that a person who directly or indirectly instigates or solicits the activity of a vigilante, facilitates or encourages vigilantism or conceals a vigilante to avoid lawful arrest commits an offence, and is liable, on conviction, to a term of imprisonment of not less than 10 years and not more than 15 years.

He also appealed to members of the house to join the government to fight corruption and illegal mining (galamsey) and preserve the environment and the cultural practices that discriminated against women and children.

Addressing the 30-member house, the President observed that those issues outlined constituted the bane of the development of communities and the country as a whole.

“Widowhood rites that still persist today have no place in the Ghana of the 21st century and so you have a responsibility to be at the forefront to help realise our vision as a prosperous nation," he admonished the chiefs.

He explained that although the Constitution barred chiefs from engaging in partisan politics, “you as chiefs must help set the tone in areas of influence to realise our vision for a prosperous nation".

“The chieftaincy institution has lived through controversial periods in our history, playing different roles at different times. The institution is and will be an indispensable part of our history and development efforts," he said.

He said his administration had done a number of things to help strengthen the chieftaincy institution, including ensuring that the allowances of chiefs at the various houses of chiefs were increased by about 100 per cent.

Furthermore, the President said, a GH¢3.5-million new office complex for the National House of Chiefs in Kumasi was constructed, while codification of traditional norms and rules was made to guide the activities of communities, as well as the digitisation of the National Register for Chiefs.

He said owing to the fact that chieftaincy issues continued to be the bane of the country’s developmental efforts, the government, through the  Ministry of Chieftaincy and Religious Affairs, had ensured that the judicial committees of the various houses of chiefs were strengthened, which had reduced disputes.

The President Akufo-Addo said under the government's Agenda 111, under which district hospitals were to be constructed nationwide in the next 12 months, a 100-bed district hospital, fully equipped with doctors and other health staff, would be provided for districts such as Binduri, Builsa South, Kassena Nankana West, Nabdam and Pusiga.

In all, he said, there were 1,488 projects being executed in the Upper East Region, with 688 of them completed and 800 ongoing, in sectors such as education, health, road, water and sanitation.

According to him, there were two deficit projects — the 109-kilometre Bolgatanga-Bawku-Pulmakom road, 50 kilometres of which had been completed, and the $1 billion Pwalugu Multipurpose Dam in the Talensi District.

He assured the chiefs that he had instructed the Ghana Education Service to collaborate with other relevant institutions to make Gurune one of the languages of instruction in schools.

The outgoing President of the Upper East Regional House of Chiefs, Naba Olando Ayamga Awini II, noted that in 2017, the chiefs made specific demands to promote development in the region, and that he was excited that those demands were being met.

He mentioned the ongoing Pwalugu Multipurpose Dam, the Bolgatanga-Bawku-Pulmakom road, the One-constituency, One-ambulance initiative, educational infrastructure, agricultural improvement and other social interventions as some of the projects that were bringing progress to the lives of the people.

Naba Awini observed that the activities of the secessionist group in the Volta Region were a worrying trend, and that it had the tendency of undermining the peace and  stability of the country.

He appealed to the President to help expand facilities at the Upper East Regional House of Chiefs to enable the house to accommodate more members.