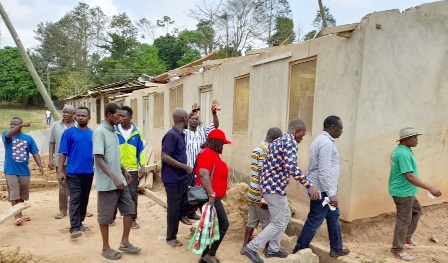 The National Democratic Congress (NDC) Member of Parliament for Assin North, James Gyakye Quayson, has donated relief items to victims of the rainstorm disaster that hit the Anhwiaso community in the Central Region last Thursday.

The items, including bags of cement, packets of roofing sheets and an undisclosed amount of money, were meant to support the over 200 persons who were rendered homeless by the disaster.

The rainstorm, which destroyed over 70 houses, schools, churches as well as farmlands in the cocoa-growing community, occurred at about 5 p.m. on February 17, 2022.

It was said to be the first of such a major disaster to hit the area where a number of the buildings have been razed down, with others having their roofs ripped off.

Currently, those displaced are putting up in the homes of families and friends within and outside the community.

The storm completely removed parts of the roofs of Maridine Victory International School.

Pupils and students of the basic school in the community are currently being cramped in few classrooms that were left intact to allow teaching and learning to go on.

Mr Quayson was taken around the most affected areas in the community by the Assemblymember for Assin Anhwiaso, James Coffie, the personnel of the National Disaster Management Organisation (NADMO) as well the elders of the community.

Handing over the relief items, Mr Quayson expressed surprise at the extent of damage in the community.

"Thankfully, no one was severely hurt but there is extensive damage to property in Anhwiaso, which is a cocoa growing community,” he said.

According to him, upon hearing their plight, he decided to bring some relief items to remedy the dire shelter situation.

The MP gave an assurance that he would partner with other stakeholders such as the NADMO and other endowed individuals to bring more relief items to the people.

The chief of Assin Anhwiaso, Nana Yaw Panyin Abanio II, expressed appreciation to the MP for his timely support to the community.

He, however, said most of the street lights that were donated by the MP and installed were carried away by the storm.

Appealing to the MP and other individuals to help replace the street lights, the chief also called for support to build a clinic and more boreholes in the area.