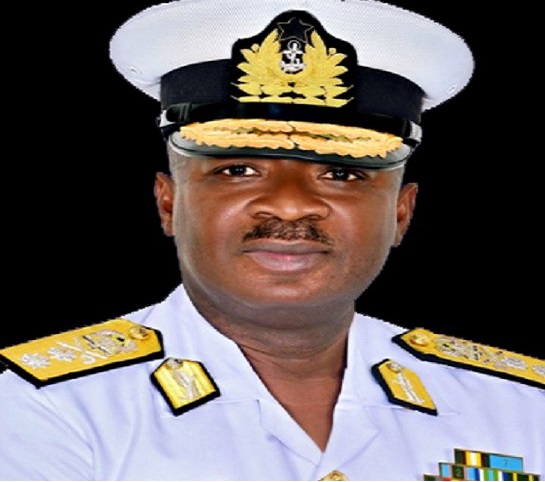 The Chief of Naval Staff, Rear Admiral Seth Amoama, has stated that the Ghana Navy is ready to make the country’s maritime domain safe and unattractive to activities that are illegal.

The Chief of Naval Staff said a recent joint operation conducted by the Navy and Airforce against piracy saw some pirates escaping narrowly.

He said the Exercise Sea Lion was also held to boost the confidence level of the country’s civilian population to the effect that the Navy was ever ready to secure the country’s maritime space.

He again said getting the country’s maritime space resilient would ensure that the public went about their fishing activities without any problems.

Aside from ocean navigation, the Chief of Naval Staff said the navy also “undertook an amphibious exercise and simulation of various manoeuvres including rescuing victims and accosting pirates and protection of national installations along the coast”.

Other aspects of the simulation exercise saw ‘rebels’ attempt to take over national installations onshore at the Aboadze power enclave, which attempt was foiled by a combination of Air Force, Navy Special Forces and  ground troops.

There were blank explosives discharged during the exercise as well as exchange of fire between the ground troops and the ‘rebels’ who were overpowered in the end and the thermal plant secured.

The sea exercise also had the Ghana Navy Fleets sailing across the equator, where a Navy ritual was performed after which they emerged as ‘Shell Backs’, which is an important achievement in the life of a navy.

The exercise is said to be timely as the Gulf of Guinea continues to experience increases in the number of maritime crimes and making it the most dangerous shipping route in the world at the moment.

Last September, the Ghana Navy and Air Force jointly foiled an attempted pirate attack on an oil tanker off the coast of Takoradi.

The oil tanker, MT Hafnia Phoenix, escaped a pirate attack some 72 nautical miles off the coast after undertaking a manoeuvre and outwitting an armed gang of pirates.

The Denmark-flagged vessel, which was sailing from Lomé in Togo to Abidjan in Cote d’Ivoire, was attacked by a group of about 10 pirates riding in a skiff (river craft) and carrying a ladder — known to be an essential tool that enables easy access onto vessels that are in sail.

Shortly after the attempted attack on MT Hafnia Phoenix, there was another effort made on a tuna vessel, MV Agnes 1, within the country’s Exclusive Economic Zone.

Rear Admiral Amoama said although the military aircraft used for the exercise was able to locate the tuna vessel, the attackers managed to escape.