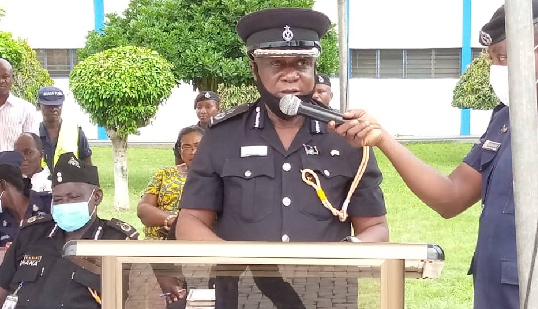 The Eastern Regional Police Command (ERPC) in collaboration with the Electoral Commission (EC) has identified 891 flash points in the region ahead of the December polls.

The Eastern Regional Police Commander, Deputy Commissioner of Police (DCOP), Edward J. Akrofi-Oyirifi, noted that the flashpoints identified woukd receive extra vigilance on the day of election to prevent any form of violence.

He was speaking to the media during a ceremony to marks the Police Memorial Day celebration in Koforidua on November 2, 2020.

“The region has about 3,704 polling stations, and 891 flash points which we have identified in collaboration with the EC. We are going to give extra focus to these flash points so that nothing untoward would happen on the election day,” he said.

Eastern Regional Police Commander, Deputy Commissioner of Police (DCOP), Edward J. Akrofi-Oyirifi laying one of the wreaths at the ceremony

DCOP Akrofi-Oyirifi added that Eastern Regional Police Command has received a number of recruits to support the existing service men that would be deployed during the presidential and parliamentary elections in various district across the Eastern Region.

“Initially, 30 of the recruits were posted to the operational unit alone for swift deployment in times of emergencies. Additional 87 recruits reported only last week which we have subsequently distributed to various districts to beef up their strength for the exercise,” the Eastern Regional Commander said.

The Eastern Regional Commander also said the Police in the region have undergone the necessary training to enable them deliver their duties effectively during the election period.

He noted that service personnel have also been taken through both theoretical and tactical aspects of their duties including training on investigation and prosecution of electoral offence under the auspices of the Legal Directorate of the Ghana Police Service.

He added that the police were ready to ensure the safety of Ghanaians druing the election, as well as ensure that the election was violent free.

DCOP Akrofi-Oyirifi expressed that the ERPC has taken notice of challenges faced by the EC and the security service men deployed to the constituencies in the Afram Plains during previous elections; hence, would device appropriate means to avert similar occurrences.

He said the service has requested for life-saving jackets for to be used by service personnel in the Afram Plains.

"If possible, there would be helicopter services to transport the election materials to the islands. We are hoping that such arrangement would be made for the smooth conduct of the elections in those areas”," he said.

The ERPC laid two wreaths in honour of two service persons that passed on in line of duty to mark the occasion of the Police Memorial Day celebration observed at all regional head offices across the country.

The two fallen heroes; General Corporal Nathaniel Marfo Afriyie passed on on December 20, 2017, in an accident while on duty on board a GCB Bank bullion van heading to the Afram Plains; whereas General Corporal Alhassan Asare was also shot dead by unidentified armed men on August 20 last year at Dukes filling station in Akim Swedru.

DCOP Akrofi-Oyirifi urged Ghanaians to continue to extend their support to the police with information during investigation to get perpetrators of criminalities against the police arrested and prosecuted.

He also called on police personnel to be extra vigilant while on duty to prevent to avoid casualties while on duty.