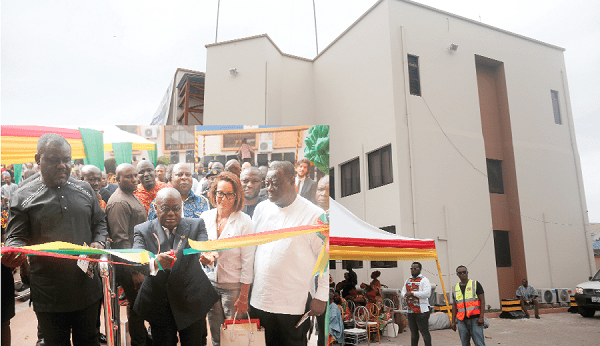 President Nana Addo Dankwa Akufo-Addo has inaugurated the first-ever traffic centre at the Department of Urban Roads that will improve traffic management at intersections.

The system, which connects with cameras and detectors on traffic lights and roads as well as with interconnective adaptive controllers, is the first of its kind in West Africa and will coordinate traffic light systems to guarantee efficient communication and a smarter way of dealing with road congestion.

Inaugurating the centre, known as the Accra Area-Wide Traffic Signal Control System, President Akufo-Addo said the smooth flow of traffic and safety on the streets were critical for the development of the country and would enhance the growth of key sectors of the national economy.

He, however, noted that there were situations where the upsurge of vehicular traffic, coupled with the rapidly increasing urban population, put a lot of pressure on road infrastructure and sapped productivity, the reason the traffic management centre was a welcome initiative.

Explaining the way the centre would function, the President said in all, 41 traffic lights had been upgraded between the Neoplan Assembly Plant at Achimota to the Central Business District of Accra and that the upgrade included the changing of traffic controllers from isolated intersection controllers, which could not communicate with one another to interconnected adaptive controllers.

He noted that the system would allow the controllers to communicate with each other along the corridor, the use of detectors buried on the road and information sent in real time to the traffic management centre.

Those, he added, would allow the engineers to observe directly traffic flow patterns along the corridor and address any incident on the road that would impede the flow of traffic.

President Akufo-Addo said with the traffic management centre, engineers could directly change the signal timing from the centre, instead of the old system whereby they had to carry their tools directly to the field to effect the changes.

He added that those systems had an integration with the public transport system, such as the Ayalolo buses, so that priority could be given to them at the intersection.

He cautioned that cameras were being installed to capture traffic law violators, which meant that the police would have real-time evidence to prosecute motorists who jumped red lights so as to bring sanity on the roads.

President Akufo-Addo said the management of the centre would be undertaken by the Ministry of Roads and Highways through the joint activities of the Department of Urban Roads, the Ghana Police Service and the Greater Accra Passenger Transport Executive.

Touching on the phase two of the project, the President said it would see the upgrade of the remaining 207 single light intersections in Accra and the current isolated intersections connected to coordinated ones.

That would include the provision of new traffic controllers and the insolation of detectors at intersection points to collect vital traffic data needed for improving traffic management in Accra.

Giving an update on some of the road infrastructure programmes under construction, the President said work would commence this year on the dualisation of the Black Star Square-Teshie-Nungua-Tema Beach road.

He added that as part of the project, an interchange would be constructed at the Nungua Barrier.

President Akufo-Addo said the project would be financed by the China Development Bank and that the loan agreement had been approved by both Cabinet and Parliament.

The project is expected to be completed in October, 2020, President Akufo-Addo said.

The Minister of Roads and Highways, Mr Kwasi Amoako-Attah, said all the Ayalolo buses operating on the Amasaman road had been affixed to elements that would send signals to the control room to ensure that they were not delayed in traffic.

He added that the works were subjected to an international competitive bidding and the major component of the project involved Ghanaian participation which was necessary for the sake of technology transfer to the Ghanaians who worked with the project.