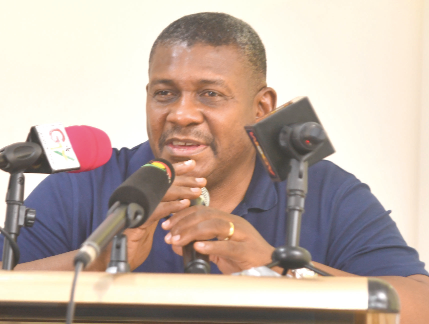 Dr Tony Luka Elumelu, the Director of the ECOWAS Protocols on the Movement of People and Goods
30.5k Shares

The ECOWAS Commission has commended Ghana for joining the list of countries in the sub-region that have deployed the biometric identification card.

The Director of the ECOWAS Protocols on the Movement of People and Goods at the commission’s directorate, Dr Tony Luka Elumelu, urged Ghana to ensure that all citizens were registered.

At a sensitisation programme for security agencies within ECOWAS on free movement in Accra,  Dr Elumelu urged other West African countries yet to adopt the system to get on board as soon as possible as the ID card was now an official travel document for movement within the sub-region.

“It is important to have everyone within the sub-region register via the biometric system as the card is now a valid travel document.

“Now, citizens from Ghana and the other three countries with their ID cards can travel freely within their countries. This is the way forward for the sub-region and it is important that other member countries adopt the system to help make it efficient and effective,” he added.

Dr Elumelu explained that the revised ECOWAS protocols recognised all people in the sub-region as community citizens and for which reason they could no longer be treated as foreigners.

“What the protocols mean is that citizens from any of the member countries are seen as community citizens so they can stay in member countries without restriction and also engage in income-making activities except being employed in the security service.

“They have the right to apply for jobs as a community citizen just like any other citizen,” he stressed, adding that processes were ongoing to take away resident permits that migrants were made to apply for in member countries.

Dr Elumelu also explained that with the approval and adoption of the African Continental Free Trade Area (AfCFTA), there was the need to improve security at the borders to facilitate free movement of people and goods.

That, he said, required the sharing of relevant data on migration and movements across the region.

A Deputy Comptroller-General in charge of Operations at the Ghana Immigration Service (GIS), Mr Laud Ofori-Afrifa, said even though efforts were being made to liberalise the free movement of people and goods, it was important for migrants to meet requirements by host countries.

"Free is not free because free things are regulated, so people need to move within the sub-region with the right document,” he added.

Mr Ofori-Atta said the complexity of migration also required State agencies to cooperate rather than operate in isolation.

The ECOWAS Protocol on the Free Movement of people and goods was signed in 1979, requiring member countries to liberalise their immigration requirements at the borders.

The protocol was recently reviewed in line with efforts to make the borders more friendly to migrants across member countries.

Following some challenges that came with the implementation of the protocols, officials of the ECOWAS Commission have since 2018 been carrying out sensitisation programmes for member countries.

The team arrived in Ghana last Thursday to build the capacity of security agencies on the revised protocols.