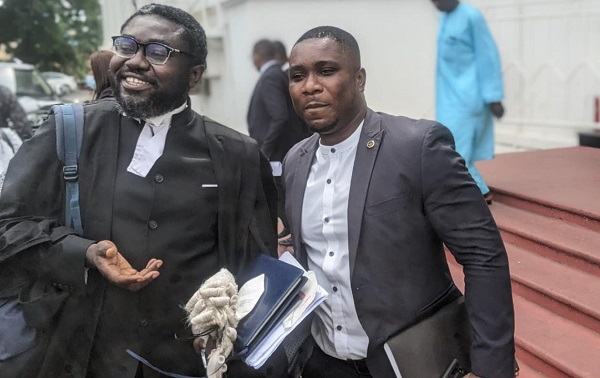 The Supreme Court on Tuesday slapped Oliver Barker-Vormawor with a cost of GH¢10,000 in an application seeking to commit the Commissioner-General of the Ghana Revenue Authority (GRA), and the GRA as a public institution for contempt.

Barker-Vormawor, had appeared before the seven-member panel of the Supreme Court as a lawyer, representing a client, Benjamin Darko of Democratic Accountability Lab.

His client wanted the Supreme Court to commit the Commissioner of the GRA, and the GRA itself to contempt of court for going ahead to implement the Electronic Transfer Levy (E-levy) while there was suit pending, challenging the implementation.

Before, Barker-Vormawor moved his application, the seven-member panel of the Supreme Court, had detected that the application itself was defective and did not measure up to the practice of instituting origination notice of motions in this court.

The panel had advised Barker-Vormawor to withdraw the application and work on the concerns raised.

However, Barker-Vormawor insisted on moving his application which triggered more concerns from the bench.

The seven-member panel of the court, which had Nene Abayateye Ofoe Amegatcher as President, dismissed the contempt application as defective, frivolous, and vexatious.

The court was of the view that Barker-Vormawor, who appeared as Counsel for Benjamin Darko of Democratic Accountability Lab, did not label the application as prescribed by the court rules.

“We do not think we should call on counsel for the second respondent to respond, the applicant in our view has no locus in this matter to file this instant application to commit the Commissioner-General and the GRA for contempt of court," Justice Nene Amegatcher said.

“Apart from the fact that we cannot commit the Commissioner-General and the GRA as an institution for contempt, the application itself is defective and does not measure up to the practice of instituting origination notice of motions in this court. The application before us is frivolous and vexatious, we find no merit in it and dismiss same”.

The Minority Leader in Parliament, Haruna Iddrisu, and two other legislators from the minority side, have filed a suit at the Supreme Court with the aim of invalidating the passage of the Electronic Transfer Levy (E-Levy) by Parliament last Tuesday.

Mr Iddrisu, Mahama Ayariga, MP for Bawku Central, and Samuel Okudzeto Ablakwa, MP for North Tongu, are asking the court to declare the proceedings and the voting in Parliament that led to the passage of the E-Levy unconstitutional, null, void and of no effect.

The plaintiffs are further seeking an order from the highest court of the land setting aside the passage of the E-Levy.

It is the contention of the three legislators that Parliament did not form the required quorum for decision making as stipulated under Article 104(1) of the 1992 Constitution which was recently interpreted by the Supreme Court in the case of Justice Abdulai v Attorney -General.

The contempt application was asking the Supreme Court to punish the Commissioner-General of the Ghana Revenue Authority for going ahead with the implementation of the E-Levy policy despite an impending interlocutory application that was filed by three members of the parliament.

The President of the bench also asked how many years Barker-Vormawor had spent at the bar as he raised concerns about how the motion was titled.

In his response, Barker-Vormawor, explained that although he had spent five years at the bar, Tuesday (July 12) was his first appearance.

The panel advised Barker-Vormawor to withdraw the application and work on the concerns raised,

However, Barker-Vormawor insisted on moving his application which triggered more concerns from the bench.

The court subsequently dismissed the motion and noted that there was no need for the respondent to respond to arguments raised by Counsel.