‘See something, Say something’ campaign launched

The Ministry for National Security has launched a citizens' awareness campaign aimed at protecting the country against terrorist attacks.

The campaign, dubbed: "See something, say something", encourages the public to be vigilant of the activities of suspicious characters and report such activities and characters to the security agencies.

The launch forms part of the ministry's border counter-terrorism strategy aimed at sensitising the public to terrorism threats and encouraging the citizenry to collaborate with state security agencies to reduce the threat of terrorism in the country.

As part of the campaign, a toll-free number — 999 — has been provided for citizens to swiftly report suspicious activities to state security authorities or use the emergency contacts and social media platforms of the Ghana Police Service to draw the attention of state agencies to unusual activities within their communities.

Where mobile connectivity is a challenge, locals are to report suspicious activities to their local police, traditional leaders, opinion leaders, heads of faith-based organisations and leaders of political parties who could expedite action to arrest any threat of terrorism attack situation.

Addressing the gathering, the Minister of National Security, Albert Kan-Dapaah, said terrorism threat in the sub-region had evolved to a point where reliance on only conventional tactics and strategies to combat it was ineffective.

Recent developments, he observed, indicated that the attacks perpetrated in the region and the Sahel had been highly unconventional.

The timing of the roll out of the campaign, he said, had, therefore, been informed by the need to implement more preventive measures following recent events in the West African region.

The minister explained that the involvement of the citizenry to support the state security with information on happenings in their localities, where the terrorists were likely to hide and commit their outrageous crimes, was essential and also made it easy for the state security agencies to identify and subsequently arrest such criminals with ease.

He assured the public that the state security was working tirelessly to protect them against any such attacks.

"The campaign is not aimed at creating panic among the citizenry but rather bolster the confidence of the public to swiftly report suspicious activities in their communities to the relevant state security agencies," he explained.

Mr Kan-Dapaah said a campaign against any misinformation that sought to create unnecessary fear and panic among the citizenry would also be run alongside the “See something, say something” campaign.

"We count on the public to take ownership of the campaign to support the state security agencies to reduce the threat of an attack on Ghana,'' he said.

The Senior Presidential Advisor, Yaw Osafo-Maafo, said Ghana remained a peaceful and stable nation, in spite of its location in a volatile sub-region.

That, he said, was evident by the recent Global Peace Index which ranked the country the first in West Africa, second in Africa and 38th in the world. 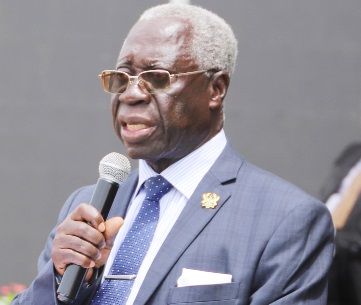 However, Mr Osafo-Maafo said, the security situation in the sub-region was rapidly deteriorating due to the threat and spread of terrorism and violent extremism.

More worrying, he noted, was the fact that the country’s neighbours along the Gulf of Guinea, namely, Togo, Benin and Cote d’Ivoire, as well as landlocked Burkina Faso on the northern border, had been severely hit by terrorist and extremist groups in recent times.

Mr Osafo-Maafo said terrorist group attacks were underpinned by terrorists’ desire to take control of resource-rich areas in the sub-region and gain access to the high seas of the Gulf of Guinea to perpetrate illegal mining, partly to generate funds to support their heinous activities

"This makes Ghana a prime target because of its gold resources and access to the Gulf of Guinea. The fact that we have not been attacked yet does not imply that we are eternally immune from the terrorists," he said.

The Senior Presidential Advisor pointed out that deliberate actions and a conscious effort by the state security agencies and all persons within the country were required to keep the terrorists away.

"If we are going to succeed in this fight, everybody must get involved," he said while admitting that the primary responsibility of the state was to protect the citizenry against threats that could adversely affect and threaten lives and livelihoods.

Mr Osafo-Maafo said the government continued to support the ministries of National Security, Defence and Interior and other relevant state authorities to implement measures towards safeguarding the state against terrorism and violent extremism.

The Minister of Information, Kojo Oppong Nkrumah, said total mobilisation of the public would make the response robust.

The campaign, he said, would get the people to understand the nature of the threat and understand their role in helping to assist the security and intelligence agencies to respond appropriately.

He urged the media to use their various platforms to engage the public and deepen understanding of the role they could play to win the battle against terrorism.

The Deputy National Security Coordinator, Edward Kwaku Asomani, said the activities of terrorists and extreme violent groups undermined the security of a country and rendered states ungovernable and could trigger humanitarian crisis.

"The campaign should be regarded as a clarion call on all citizens to play their role in protecting the nation while keeping the security agencies accountable in the fight against terrorism," he added.