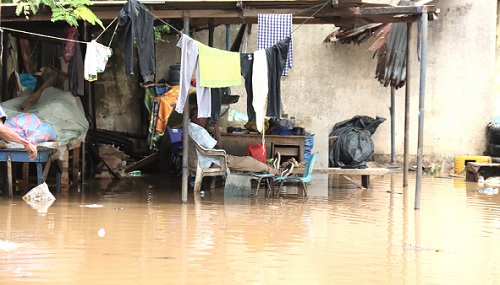 For the second time in three days, residents of Accra were at the mercy of heavy floods after an overnight downpour submerged parts of the city and its environs.

The eight-hour rains lasted up to about 6 a.m. on May 24, 2022, from the previous night, hitting hard at the flood-prone areas of the city, and leaving piles of garbage strewn across the roads and other open spaces.

Adabraka, Kaneshie, Alajo, Tetegu and STC, Mallam, Kasoa, Adenta, Afienya, Odawna, Graphic Road, Abossey Okai, and the environs of the Kwame Nkrumah Interchange — the centre of the June 3, 2015, fire-cum-water disaster in Accra — were among the worst affected.

The floods extended to other low lying areas, including parts of Ga South and Ga West municipalities, where homes, shops and fuel stations were flooded and access routes were rendered unsafe for vehicles.

At Teshie, parts of the Beach Road, under construction, became impassable, warranting a policeman to direct traffic through alternative roads.

Residents, trapped either in their homes or in traffic, sent distressing messages to the authorities.

A joint team from the Ghana Armed Forces and the National Disaster Management Organisation (NADMO) were deployed over the period for rescue operations.

Many shops remained shut to business the whole of Tuesday, May 24, as the public struggled to deal with the floods. For those that opened, it was to salvage wares left untouched by the rains, reports Delali Sika.

Residents and traders spent long periods scooping water from their homes and shops, salvaging whatever was possible, with buckets and pumps, and cleared debris in a massive clean-up exercise. 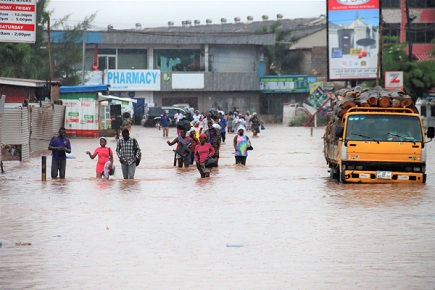 Around 10 a.m. at the Kaneshie enclave, massive flood on portions of the tarred road from Kaneshie to the Graphic Road had caused vehicular traffic on that stretch.

The Kaneshie Polyclinic suffered temporary closure, as a result, to allow staff to clean up the environment.

“Using that stretch on a normal day could take 10 to 15 minutes, but one had to spend 45 minutes in traffic today before getting to the roundabout,” a resident, Sedinam Klutse, told the Daily Graphic.

A resident of Adenta SDA, Success Akakpo, said the intensity of the rain was such that it favoured only those who had cars.

Around Toyota and the Goil fuel station on the Graphic Road, pedestrians walked through the flood as the areas were submerged in water.

Some traders at the Odawna Market at Adabraka called on the government to honour its promise to construct a new market for them, reports Juliet Akyaa Safo.

The traders said they had suffered enough from floods and fire disasters over the years.

A number of items, including fridges, kitchen appliances, clothes, shoes, hair and make-up accessories, and toiletries, were destroyed in the floods, while one of the walls around the market collapsed as a result of the rain.

The traders lamented the state of the market, saying although the government had supported them in the past, it had not helped to sustain their businesses.

The Public Relations Officer of the Korle Klottey Municipal Assembly, Nii Ofori Quaye, said the assembly had had series of engagements with the traders concerning the construction of the market.

“We have had series of stakeholders’ engagement with market executives, the traders, and all who matter. The pedestrian shopping mall market is on course; what is happening is that the assembly is first constructing a storm drain, which will run through Paloma Hotel through Asylum Down via the pedestrian shopping mall into the Odaw River, and then start with the construction of the market,” he said.

He urged the traders to wait patiently for the construction of the market to start.

Emmanuel Bonney reports that the road after the Kasoa tollbooths was blocked by sand that had washed from the hillside, compelling drivers to use alternative but winding routes.

Drivers from Kasoa also shifted to the opposite side of the dual carriageway, driving in one of the lanes from Accra.

This was to avoid the flood on the SCC-Old Barrier stretch.

The situation resulted in a traffic congestion on the lane coming from Accra as the vehicles struggled to use the lane.