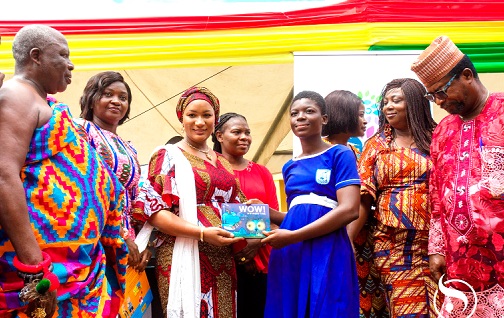 Samira Bawumia (4th from left), Founder of Samira Empowerment and Humanitarian Project, presenting one of the books to a beneficiary from the St Peter’s Anglican Basic School. Follow @Graphicgh

A non-profit organisation, the Samira Empowerment and Humanitarian Project (SEHP), has donated stationery and literary materials to four basic schools in the Awutu Senya East District in the Central Region.

The donation, spearheaded by the wife of the Vice-President, Samira Bawumia, was under the SEHP's flagship programme, the “Library in a Box” project.

They received story books, textbooks, notebooks and exercise books to help cultivate the habit of reading in the schoolchildren.

At the event, Mrs Bawumia said reading was an integral part of children's education and upbringing.

She further stated that the books were to complement teachers' efforts in nurturing the children and improving their literary skills.
Books, she said, were the windows to the world, helping students to know about parts of the world they had not seen.

"That way, later in life, when they get to these places they read about in books, they will feel familiar with the environment and can easily settle in," she explained.

She encouraged students to read books and be equipped with knowledge that will help shape their destinies.

"The books are not for display, the teachers should share them to the children and also read with them. There should be time allocated as reading time for the students," she added.

Mrs Bawumia mentioned that since its inception in 2017, 68 basic schools had benefited from the project.

“Over 200,000 books have been distributed, benefiting over 65,000 pupils across the country,” she mentioned.

The Central Regional Minister, Faustina Marigold Assan, for her part, expressed gratitude to the SEHP for coming to the aid of the students in the region.

She advised students to take maximum advantage of the opportunity given them and read the books.

"Use the books very well, do not leave them to collect dust on the shelves," she advised.

The Chief of Opeikuma, Nana Opei Mensah II, expressed appreciation to the SEHP for the donation, adding that it was the first of the kind to happen in the town.

He, however, pleaded for assistance for the bad roads in the community, saying that the roads leading to the school were very bad and were not safe for the children.

The Chiefs and traditional leaders of Awutu Senya were also present at the event.