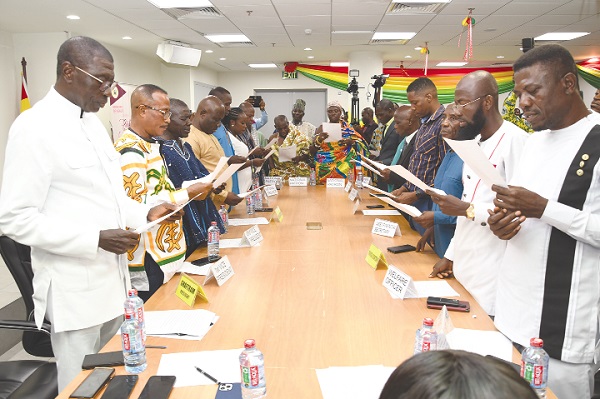 The President of the Ghana Federation of Traditional Medicine Practitioners Associations (GHAFTRAM), Professor Samuel Ato Duncan, has appealed to the Health Ministry and for that matter the government to increase the number of herbal units in health facilities from the current 55 to cover all government hospitals.

Increasing the number, he said, would lead to the expansion of health coverage in the country.

Prof. Duncan made the appeal at the swearing in of new executive members of GHAFTRAM in Accra last Tuesday.

The 22-member executives, who were sworn in by a justice of the Supreme Court, Justice Yonny Kulendi, has Prof. Duncan as the President.

The executives are made up of 18 national officers and four elected patrons.


Prof. Duncan said Ghana had traditional medicines that could take care of cancers, kidney diseases, viral infections and many other diseases, with minimal side effects.

He said if the country was able to develop and package those medications to global standards, it would have a lot of medicines that could support the health of the people and for export to bring in foreign exchange.

"The traditional medicine sector presents a unique opportunity for the attainment of quality healthcare delivery, reduce the unemployment burden, create wealth, as well as stimulate socio-economic activities within the value chain," he said.

GHAFTRAM is a federation of traditional medicine practitioners associations.

The total number of traditional medicine practitioners in Ghana is about 40,000; however, only 3,890 are registered.

Prof. Duncan, who is also the Founder and Chief Executive Officer of COA Company, said Ghana could rake in billions of dollars from traditional medicines, adding that a lot of progress had been made regarding traditional medical practice.

"Traditional medicine was once termed as ‘primitive’, but that designation is gradually becoming a thing of the past. Now many practitioners adopt scientific processes in their production.

“We hope to partner various countries and institutions that have made significant progress in the manufacture and administration of traditional medicines. We know China and India are far advanced in this direction," he said.

Prof. Duncan said the association would engage with relevant stakeholders to develop a system whereby practitioners who did not have formal education would be given the opportunity in the local languages they understood and subsequently issued with standard certificates.

That, he said, would further enhance their activities.

Touching on the economic challenges in the country, he said if gold, cocoa and oil had all failed in turning around the economic fortunes of the nation, then the country must look to “the green gold agenda GHAFTRAM wants to pursue”.

"In the coming days, together with my executives, we shall engage the various stakeholders in the areas of medicine, science, technology, research and entrepreneurship to brainstorm and map out a plan of action towards the implementation of the green gold revolution," he said.

The Director for Traditional and Alternative Medicine at the Ministry of Health, Dr Anastasia Yirenkyi, said if the country wanted to achieve the Ghana Beyond Aid agenda, then a major focus must be on traditional medicines.

She charged traditional medicine practitioners to ensure that the country was able to rub shoulders with developed countries in terms of the production of quality, standardised and efficacious herbal medicines.

In his remarks, the President of the Ghana Journalists Association (GJA), Albert Dwumfour, congratulated the new executives an urged them to stick to their vision.

He also urged them to ensure that all their members followed rules and also worked hard to dispel the myths around traditional medicines in the country.