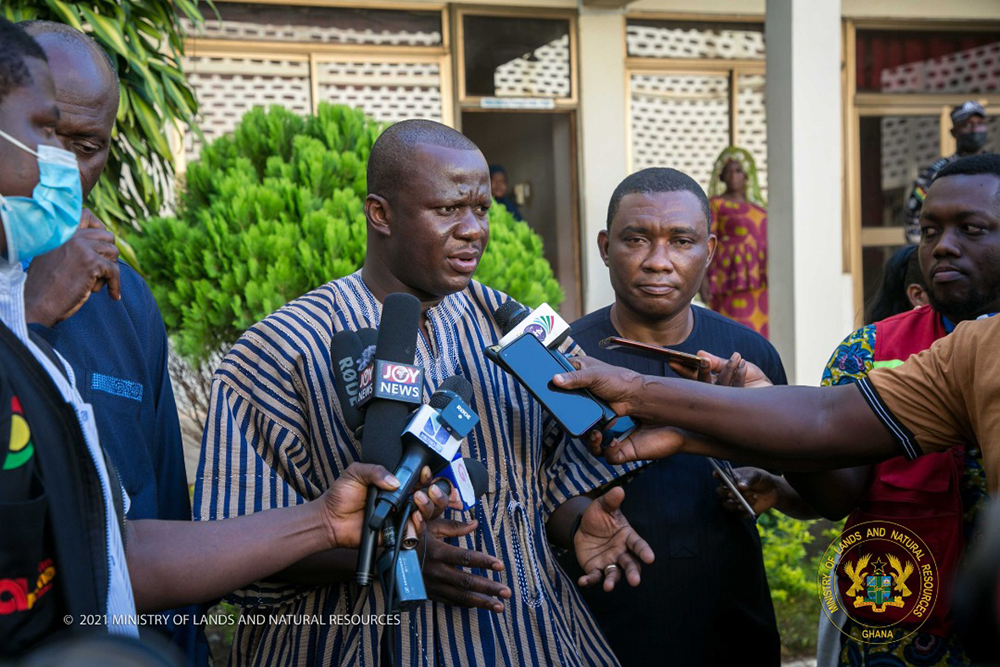 Mr Samuel Abu Jinapor, the Minister of Lands and Natural Resources, speaking to some journalists

The government has committed to adopting a proactive approach to regulate the emerging mining sector in the northern part of the country.

The north has lately become very alive with mining activities — both small and large-scale operations — while illegal mining ( galamsey) is also becoming a major challenge.

In the Upper East Region, Cardinal Resources, a mining firm, is currently undertaking preparatory works towards establishing one of the country’s biggest mining operations in Talensi, while Earl International Gold (GH) Limited has obtained the necessary permits to commence large-scale underground rock mining in the same region.

The exploitation of iron ore at Sheini in the Northern Region, significant deposits of gold at Dollar Power, a border town in the Savannah Region and illegal small-scale mining activities at Nagroma in the North East Region are some of the emerging issues in the sector.

Speaking at a meeting with the Small Scale Miners Association in Bolgatanga last Wednesday, the Minister of Lands and Natural Resources, Mr Samuel Abu Jinapor, said: “Mining activities have become rampant in the north. The conventional wisdom was that mineral deposits were only found in the south, but as we can see now, there are significant proven resources in the north as well.”

“If we don’t begin enhanced regulation at the very beginning, we will lose the opportunity,” he added.

Mr Jinapor, who was on a week’s tour of the five regions of the north, said lessons from the mining industry in southern Ghana “ought to guide our actions in the north and the government will not relent to ensure enhanced regulation”.

He said river bodies and the integrity of the ecosystem in the northern part of the country must be preserved at all cost.

Furthermore, he insisted that the institutional, legal and operational framework for the sector should be fit for purpose and capable of dealing with all emerging challenges.

Mr Jinapor, who also addressed the Upper East Regional House of Chiefs, called on the traditional authorities in the region to support the government’s efforts at ensuring the efficient management and exploitation of mineral resources in the region.

He said the traditional authorities needed to be involved to ensure the efficient management of the resources.

“The Upper East Region has sand, granite, limestone, quarry and gold, and already it has been established that gold is found in commercial quantities in the region. We are already aware that there is a very robust small mining industry and there are about two or three large-scale mining operations ongoing in the region,” he said.

Therefore, he said, it was imperative for the traditional authorities to play pivotal roles in the operations of all mining companies from the beginning to ensure that there were proper regulations in place, so that the region would become a model for learning and practice in the mining industry.

“We do not have to wait, as happened in southern Ghana, for mining to be done irresponsibly; for river bodies to be polluted, so that we cannot have water to drink again; for the land to be degraded and polluted with all kinds of chemicals used for mining, only for us to come and say we are forming a task force against the practice; that will not help us,” he said.

Mr Jinapor explained that although the Constitution made it clear that all mineral resources were vested in the President, the surface rights empowered the chiefs and other traditional authorities to play pivotal roles in the mining industry.

The minister called for the strengthening of cooperation between the government and traditional authorities to ensure that mining was done in a responsible manner.

The Upper East Regional Minister, Mr Stephen Yakubu, said most of the issues in mining areas in the region had been resolved.

Going forward, he urged all stakeholders to support the government's measures to ensure that mining companies complied with mining laws for improvement in the lives of the people.

The Vice-President of the Upper East Regional House of Chiefs, Naba Abisa Anthony Atasige III, expressed the commitment of the chiefs to support the government to promote responsible mining in the region.

Nana Atasige, who is also the Paramount Chief of the Mirigu Traditional Area, however, advised the government to take urgent steps to effectively address illegal mining.