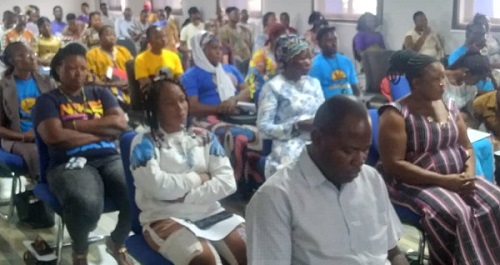 An investment forum to create awareness of business opportunities in the Upper East Region has been held in Bolgatanga.

Participants included captains of business, who were also taken through best practices on how to improve their trade for better outcomes.

The forum, organised by the Ghana Investment Promotion Centre (GIPC), also provided an ideal platform for the identification and compilation of data on various investments projects and opportunities to attract investors to the area.

The event formed part of efforts by the GIPC to encourage local businesses to work towards meeting the requirements of the centre.

It was attended by representatives of the Upper East Regional Coordinating Council (RCC), municipal and district assemblies (MDAs), members of various artisan groups, including the Ghana National Tailors and Dressmakers Association (GNTDA), and the smock and garment weavers association.

Similar fora have been held in the Northern, Upper West, Savanna and North East regions.

The Upper East Regional Minister, Stephen Yakubu, in a speech read on his behalf by the Chief Director of the RCC, Alhaji Inusah Abubakari, said the region abounded in many human and natural resources which, if well harnessed, could lead to the transformation of the area.

“Our resources range from water bodies for irrigation, mineral deposits such as gold, rocks for quarrying and tourist attractions,” he said, adding that there was also litigation-free land for investment.

“As part of my vision to fast-track the transformation of the region, I have tasked the management of the 15 MDAs to establish land banks to facilitate the establishment of businesses for job creation,” he added.

The minister said his outfit had received proposals for the revamping of defunct factories in the region and mentioned those factories as the cotton company at Pusi-Namongo, the tomato factory at Pwalugu, the Bolgatanga rice mill and the meat processing factory at Zuarungu.

“We, therefore, appeal to the GIPC to take a critical look at these factories and extensively market them to win the hearts of investors,” he said.

The Regional Manager of the Ghana National Chamber of Commerce and Industry (GNCCI) for the five regions of the north, Jeremiah Bontariba Tengan, described as unfortunate the continuous stereotyping of the north, where there were untapped and fertile tracts of land and resources available for investors to set up businesses to facilitate growth.

The Head of the Monitoring and Evaluation Division of the GIPC, Dr George Asafo-Agyei, said the region had a huge potential in mining, shea butter production, tourism, among others, as well as factories that needed to be profiled and marketed to attract potential investors for revamping.

He advised business owners to register their entities as private limited liability companies to provide the opportunity for others to partner them to expand those business for their mutual benefit.