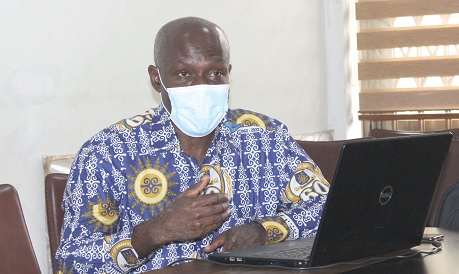 One-hundred and seventy-four newborns (0-6 weeks) have presumptive sickle cell (possible traits of the disease) in 11 regions in the country.

This was the outcome of a screening exercise conducted on 10,332 newborns in those regions between July and December 2021, the Ghana Health Service (GHS) has said.

This comes barely two years after the launch of a national free newborn screening programme for sickle cell disease in the country.

Speaking with the Daily Graphic ahead of the celebration of this year’s World Sickle Cell Disease Day on June 19, the Programme Manager of Newborn and Child Health at the GHS, Dr Edward Antwi, explained that newborns in five other regions were not screened during the reporting because those regions did not have functional sickle cell clinics.

Those regions are the Upper West, North East, Savannah, Oti and Ahafo.

“We are working to establish sickle cell clinics in those regions to enable them to start screening newborns for the disease,” he said.

What is Sickle Cell

Sickle cell disease is an inherited blood disorder. In babies and infants, clear signs of the disease may not be seen, but in older children, their growth is affected.

It makes a child fall ill often because the body is not able to fight infections, leading to crisis — a period of extreme pain in the bones and joints.

If it is not well managed in a child, it can cause stroke.

World Sickle Cell Day is, therefore, commemorated to raise awareness of the disease.

The screening of newborns for SCD in the country was begun by the late paediatrician with speciality in haematology, Prof. Kwaku Ohene-Frempong, at the Komfo Anokye Teaching Hospital and some polyclinics in the Ashanti Region in 1995.

In 2019/2010, the government decided to extend the exercise nationwide.

It was spearheaded by the Sickle Cell Foundation of Ghana (SCFG), which was founded by Prof. Ohene-Frempong, in collaboration with the Ministry of Health (MoH) and the GHS, leading to the development of a policy on the disease.

Not much happened afterwards, until 2019 when a US-based organisation linked up with the GHS, the MoH and the SCFG for the programme to be rolled out.

Dr Antwi said the goal of the programme was to have every baby in the country screened for early diagnoses and treatment.

“Babies and children with the disease have challenges with infections, which increase their risk of serious illnesses and death. So we give them penicillin, which is an antibiotic that provides a form of protection from severe infections, and folic acid, which helps with blood formulation,” he added.

He, however, said if there were delays in diagnosing the condition in newborns, infections such as pneumonia could cause serious illness or death.

Dr Antwi mentioned one of the major challenges confronting the programme as the refusal of parents to have their babies screened.

He said there was also the problem of inadequate trained health staff to do the screening at designated sites.

He said the inability to track and follow up on babies with presumptive sickle cell disease was due to the wrong contact information provided by caregivers to the health authorities.

On future plans, he said the GHS would establish more sickle cell clinics in every health facility to make the screening exercise more accessible to the public.