The day is set aside every year to create global awareness of the contribution of international civil aviation to the socio-economic development of member countries.

The event, which was on the theme: “Advancing innovation for global aviation development”, underlines the unique role the ICAO plays for nations to realise a safe global air transport system.

In Ghana, the occasion was used to highlight some of the key roles the aviation sector has played in the development of the country since independence in 1957.

Officers of the Rescue Fire Fighting Service at the Ghana Airports Company Limited (GACL) raised the flags of Ghana, the ICAO and the Ghana Civil Aviation Authority (GCAA) to commemorate the day at the Forecourt of the GCAA Training Academy (GATA). 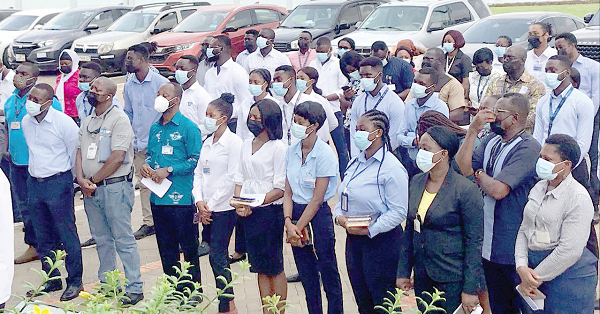 Ms Okae said in spite of the fact that the sector was playing its role effectively, most civil aviation authorities — airlines, airports and air navigation service providers (ANSPs) — had not fully recovered from the devastating impact of the COVID-19 pandemic.

She said the GCAA, like many key players in the aviation sector, had been badly affected by the pandemic.

"Our revenue levels plummeted and our staff had to take pay cuts as part of the measures we implemented to mitigate the impact of the pandemic,” she said.

Ms Okae said since becoming a contracting ICAO state on May 9, 1957, Ghana had been working through the GCAA and complied with the standards and recommended practices of the UN-specialised aviation agency.

"Indeed, industry trends indicate that ICAO compliance leads to enhanced air connectivity, which is a prerequisite for states’ economic development.

"Ghana obtained an Effective Implementation (EI) rate of 89.89 per cent, the highest by an African country, after the ICAO concluded its coordinated validation mission (ICVM) in April 2019.

"And, in October 2019, the ICAO also conferred two prestigious awards — one in safety compliance and the other in aviation security compliance — on Ghana at its 40th Triennial Assembly in Montréal, Canada,” she said.

Ms Okae said as the regulatory agency for air transport in Ghana, the GCAA remained committed to its core mandate of licensing air transport operations, maintaining oversight of aviation safety and security, as well as providing air navigation services within the Accra Flight Information Region (FIR).

Mr Acquah, for his part, explained that the day was set aside to help generate and reinforce awareness of the importance of international civil aviation to the social and economic development of member states.