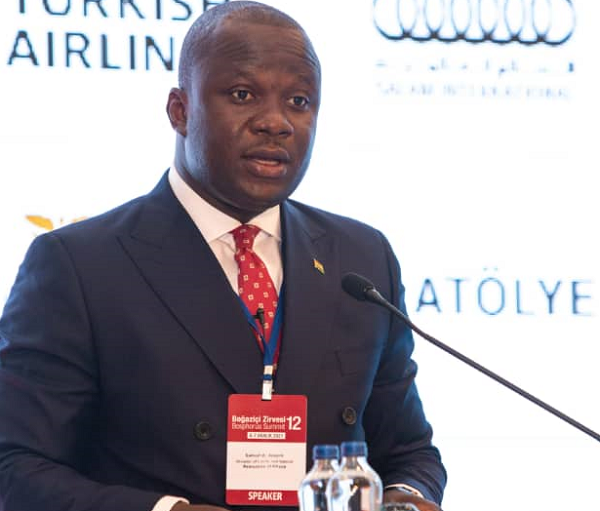 The government is rolling out a robust afforestation and reforestation programme to restore degraded landscapes in the country, the Minister of Lands and Natural Resources, Mr Samuel Abu Jinapor, has disclosed.

The restoration activities will be undertaken by both the private and the public sectors.

Accordingly, the programme, described as “ambitious”, will require sustainable financing and logistical support.

In that light, Ghana, the minister said, was ready to partner global partners, institutions or private sector actors who wished to share their rich experiences and best practices in landscape restoration.

Mr Jinapor, who is also the Member of Parliament (MP) for Damongo, was delivering a keynote address at a roundtable forum on the topic: “Effect of climate change on the ecosystem and the importance of forests and sustainable livelihoods” in Istanbul, Turkey, last Monday.

The discussions centred on good governance and innovation of companies through effective board, green energy, banking and finance, women in science, economy and law.

The two-day summit, on the global theme: “Meeting the challenges for a better world”, was organised by the Istanbul-based International Cooperation Platform (ICP) and featured the participation of high-level government officials, experts, business leaders and academics.

“Let us move towards actions to reduce our carbon footprints that exacerbate climate change.

Times have changed; we have moved from the position of measuring poverty by food security or the lack of it.

Poverty is not only based on food security; there is the need to add multi-dimensional characteristics such as sustainable livelihoods,” he opined.

Quoting Diana Carney, a widely respected expert on global climate and energy policy, who reasoned that “a livelihood is sustainable when it can cope with, and recover from stresses and shocks and maintain or enhance its capabilities and assets both now and in the future, while not undermining the natural resources base”, the Lands Minister concluded by emphasising that the ability to move out of poverty was contingent on sustainability of livelihoods which centred on environmental, economic, social and institutional dimensions.

Mr Jinapor indicated that because of the unequal development that existed among nations, they were likely to take actions based on their abilities and capacities.

However, he was of the firm conviction that “we can only achieve our aim if global climate actions are real and verifiable”.

“And this, we must do, by embracing real and verifiable emission reduction initiatives in our forest sector,” he added. 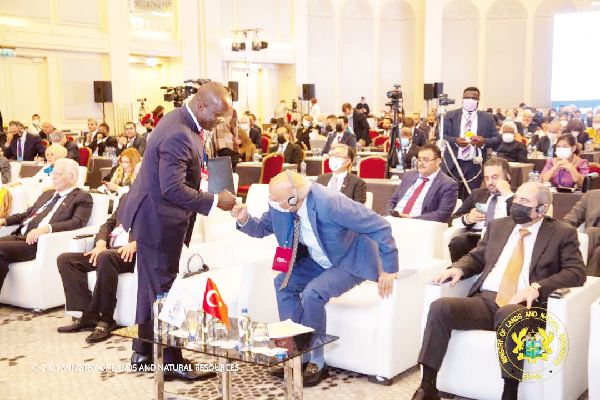 Mr Jinapor said Ghana, under President Nana Addo Dankwa Akufo-Addo, who has just been named “Forbes 2021 African of the Year”, remained fully committed to contributing to the global effort at halting climate change and its attendant debilitating consequences.

“The impact of climate change transcends livelihoods, safety, security, health and well-being of the people, particularly the poor and most vulnerable communities,” he told the summit.

Mr Jinapor reminded the participants that Goal 13 of the SDGs admonished states to take urgent actions to combat climate change and its impacts.
Science and data at both the national and the global levels, the minister pointed out, emphasised the fact that the earth's climate was changing, and Ghana had encountered its fair share of climate change consequences.

Globally, he said, Ghana ranked 151st out of 188 countries in per capita emissions and further pointed out that although the country contributed only 0.07 per cent of global emissions, it was highly vulnerable to global climate change.

“We can all attest to the fact that climate change has been a constant growing global threat to biodiversity and ecosystems,” he said.

The Moderator of the forum, Prof. Dr Liter Turan, who is the Honorary Board Member of ICP, Turkey, said climate change issues posed a challenge to building a better world for all.

He said the problem associated with climate change was “how we change the culture of all stakeholders, as well as make resources available to fight the menace”.

He said the period before the COVID-19 pandemic, during the pandemic and beyond offered the world the opportunity to rethink how to overcome the problem of climate change and build a better world.

The 75th President of the UN General Assembly, Mr Volkan Bozkir, who was a discussant at the forum, emphasised the need to urgently identify countries in much need of support, especially those in landlocked zones.

He said the world must take urgent steps to reach people faced with hunger and land degradation.

Mr Bozkir noted that the COVID-19 pandemic was making things difficult for many economies, saying although the world had been successful in getting vaccines, their distribution had been shameful.

The vaccine distribution must not be a trade commodity, he cautioned, adding: “If we leave it to countries, the decision on the distribution will be taken politically.”

He, therefore, called for an enhanced UN role in the distribution of COVID-19 vaccines, arguing for the need to give more political support to the global body, while ensuring that the UN was there before any problem started.

“This is preventive diplomacy,” he said.