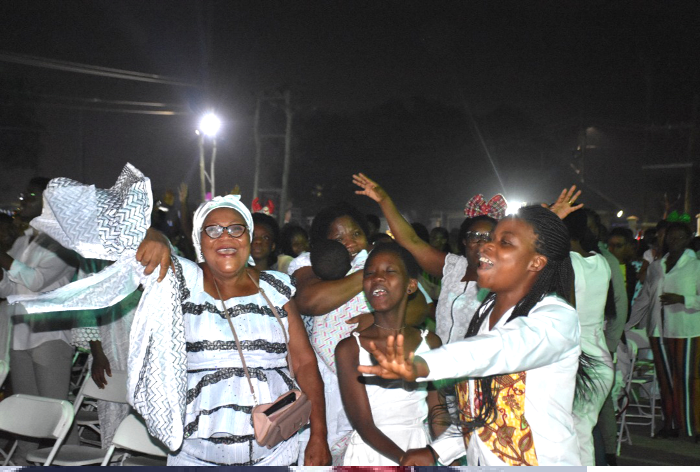 Congregants at the Hope Congregation of the Presbyterian Church of Ghana at the watch night service
30.5k Shares

Christians across the country ushered in the New Year with watchnight services that attracted thousands of patrons.

The watchnight services travelled into January 1, 2023, with congregants offering prayers of thanksgiving to God for protecting them and wishes of breakthrough and divine favour in the coming year.

There was heavy security at the designated worship centres, with the police and other security officers on guard against possible attacks and criminal activities.

Central themes that ran through messages from the clergy ranged from hope, forgiveness, love, optimism to renewal of mindset.

From the Greater Accra Region, Juliet Akyaa Safo reports that members of the Liberty Centre Assemblies of God Church at Abeka filled the 2,500-capacity chapel for the occasion.

In his sermon, the Senior Pastor of the Church, Reverend Dr Sam Ato Bentil, called on Christians to renew their minds and heart to receive a transformation in the New Year.

He said that would enable them to know the perfect will of God.

Rev. Dr Bentil also urged the church members to reflect on the word of God and have the confidence that they would succeed in anything they put their minds to.

From the Perez Chapel International, Emmanuel Bonney reports that the Founder of the church, Archbishop Charles Agyinasare, gave the assurance that God would be faithful to His people this year.

He said although 2022 was eventful with issues such as the Russian-Ukraine war, floods and natural disasters, global economic crisis and the depreciation of the cedi against the dollar, God kept His word in the midst of the challenges.

"The God who kept His word in 2022 would surely do it again the coming year,” he said.

Archbishop Agyinasare told the congregants that they should trust in God because He would surely make His word come to pass in their lives.

The General Overseer of The Lord’s Pentecostal Church International, Apostle Eric Essandoh Anim Otoo, said “We are grateful to God for ushering us into the new year, 2023.

“The Lord has been gracious and merciful to us in all ways, and we need to be grateful to Him. We can look forward in hope for a fruitful year despite the seeming challenges that surround us,” he added.

He said this could be possible if the society put its trust in the Lord.

“As we prepare for general election next year as a nation, we need to prepare ourselves for a very peaceful election by conducting ourselves very well and be guided in our utterances with seasoned words,” he said.

At the Hope Congregation of the Presbyterian Church of Ghana at Sakumono Estates, worshipers welcome the New Year with prayers, praise and adorations to God for seeing them through the previous year, reports Benjamin Xornam Glover.

In a sermon titled: "More Than Conquerors”, Rev. Mrs Sylvia Emily Akuffo Anning Bonsu reminded the congregants that irrespective of the challenges in the previous year, God had gone ahead of them and won victory.

"You are entering a new year with confidence because the Lord is with you. You are more than a conqueror. God will surely give you victory in 2023," she said.

The Sakumono District Minister of the PCG, Rev. Daniel Amoako Nyarko, also in a New Year message, expressed appreciation to the congregants for the massive participation in activities of the church, especially outreach events, prison and hospital visitation, among others.

From Kumasi in the Ashanti Region, Emmanuel Baah reports that the General Overseer of the Calvary Charismatic Church (CCC), Reverend Ransford Obeng, cautioned the citizenry to be wary of the craze for quick wealth.

He observed that although people aspired to make progress in life, it ought to be done in “a more decent manner”.

“All the wealth that is made on a silver platter cannot last,” he said, while delivering the sermon during the New Year service at the church’s auditorium at Ayigya.

He also advised unemployed youth to tread cautiously in their quest to seek employment “because rushing for non-decent and dangerous jobs which guaranteed quick successes today would rather dwindle your fortunes and ruin their lives”.

During the service, Rev. Obeng laid hands on some ‘Christmas babies’ and prophesied that through Christ, they would live to see nothing but victory. 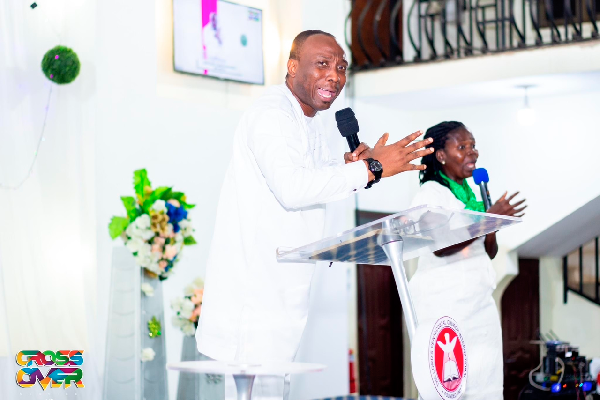 From Shirley Asiedu-Addo in Cape Coast, there were exciting church services for the Christmas Sunday, the watch night service and and New Year’s Day.

In a sermon titled “Repositioning ourselves for the new thing God will do” at the Abura District of the Cape Coast Area of the Church of Pentecost, the Area Head Pastor, Apostle Samuel Yaw
Antwi, urged Christians to increase their devotion with the Lord.

He admonished Christians to remain resolute in the walk with God going into the New Year, and advised them to see God as their redeemer.

The Head Pastor of the Redemption Baptist Church in Cape Coast, Rev. Dr Isaac Mills-Owoo, said despite the economic challenges, the Lord would guide Christians and provide for them.

Residents in the Upper East Region, especially those in Bolgatanga, celebrated Christmas and welcomed the New Year with joy and excitement after attending services in their respective churches, reports Gilbert Mawuli Agbey.

As Christmas Day fell on a Sunday, many residents flooded various churches to give thanks and praises to God for his protection and blessing throughout the year.

During the 31st watch night, churches in the regional capital held services to usher in the New Year, with many filled to capacity, and some congregants compelled to stand outside to take part in the service.

Alberto Mario Noretti reports that churches in Ho in the Volta Region kept vigil to usher in the New Year, with intercessory prayers for the nation.

At the Dela Cathedral of the Eangelical Presbyterian Church, Ghana, at Ho-Kpodzi, the scene was reminicent of a carnival.

Some members of the congregation followed the service on a giant screen on the forecourt of the chapel, which was filled beyond capacity.

The Moderator of the General Assembly of the church, Rt Rev. Dr Lt Col Bliss Divine Agbeko (retd), called on Ghanaians to “demonstrate gratitude to God for bringing us this far”.

“Let us continue to pray for wisdom for leadership to make the right decisions for the nation,” he said.