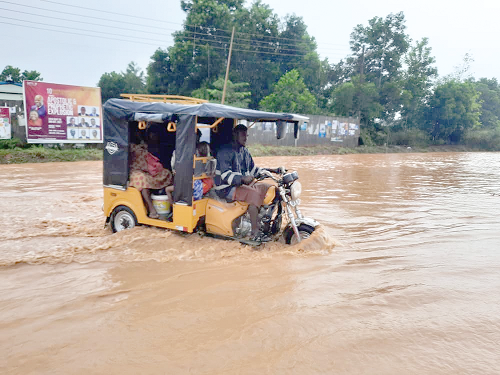 A passenger tricycle (Pragia) wading through the floods at Abura

The Central Regional capital, Cape Coast, and its environs yesterday came under siege from flooding following several hours of rain.

The Ghana National Fire Service spent hours pumping water out of affected areas, and in some cases had to break walls of homes to rescue residents to safety.

Many schools, including the University of Cape Coast (UCC), had to suspend activities for the day, while most shops remained closed.

The areas affected included Pedu, Abura, Academy and the PPAG office area, Eyifua, the Nokaans Hotel area and the UCC.

There was no fatality recorded though.

A residential property inundated by floodwaters

The Director of Public Affairs of the UCC, Major Kofi Baah-Bentum (retd), said the university had taken the decision to ensure the safety of both students and lecturers.

He noted that the university had done a lot of engineering works to contain the flooding, but that did not seem to have completely resolved the challenge in its entirety.

"We have done what we have to do with the engineering, but if the rains are too heavy, the flooding cannot be avoided," he stated. 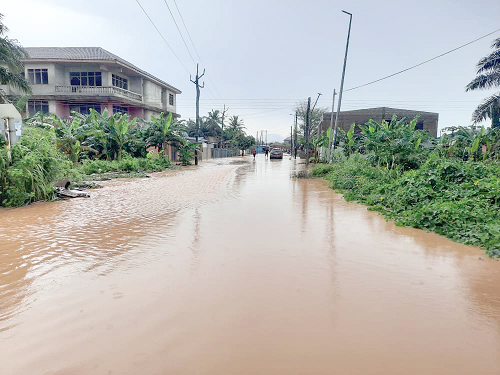 A street in the metropolis flooded

The Central Regional Public Relations Officer of the Ghana National Fire Service, DOIII Abdul Wasiu Hudu, said: "A lot of properties have been destroyed already, but we are doing our best to ensure we save lives and salvage as much of the property that we can," he stated.

Cape Coast has been at the receiving end of floods in recent times.

On October 30, 2019, many residents were virtually locked in their homes after about six hours of rainfall.