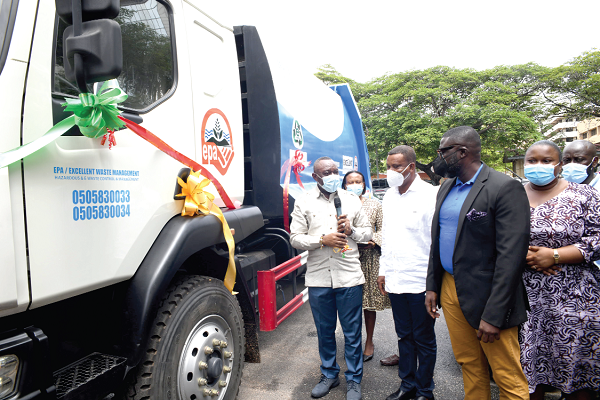 The Environmental Protection Agency (EPA) has begun a programme to collect electrical and electronic waste for proper disposal.

The initiative, which is a partnership between the EPA and Excellent Waste Management, includes visit to public and private establishments to inspect and collect e-waste for recycling.

At the launch of the pilot programme in Accra yesterday, the Executive Director of the EPA, Dr Henry Kwabena Kokofu, unveiled a specialised truck to be used for the exercise in the Greater Accra Region.

He said additional vehicles would be purchased for the programme, which would be extended to the other regions.

Dr Kokofu said the initiative was in line with provisions of Section 1(3) of the EPA Act, 1994 (Act 490).
Section 1(3) of Act 490 stipulates that "the EPA may, in the performance of its functions, acquire and hold movable or immovable property and enter into a contract or any other transaction".

He said it was also in furtherance of Section 31 of the Hazardous and Electronic Waste Control Management Act, 2016 (Act 917), which says "the minister, on the advice of the EPA, may make arrangements for the establishment of electrical and electronic waste recycling plants and related facilities in the country".

"Effectively, the project has started. We have a team of environmental inspectors who will be going round institutions to inspect used electrical and electronic equipment and other hazardous waste.

“We will also look at how the institutions are storing them and how they dispose of the equipment. If they have no plans, we will give them the plan and take charge, do inventory, invoice and transport them to designated and appropriately licensed recycling facilities," Dr Kokofu added.

He stressed the need for ministries, departments and agencies (MDAs), as well as metropolitan, municipal and district assemblies (MMDAs), to put in place mechanisms to segregate waste to make its disposal and recycling efficient.

The General Manager of Excellent Waste Management, Mr Samuel Asiamah, described the partnership with the EPA as a novelty and giant step towards the effective management of e-waste.

He said the company would deliver its mandate efficiently to address e-waste challenges in the country.