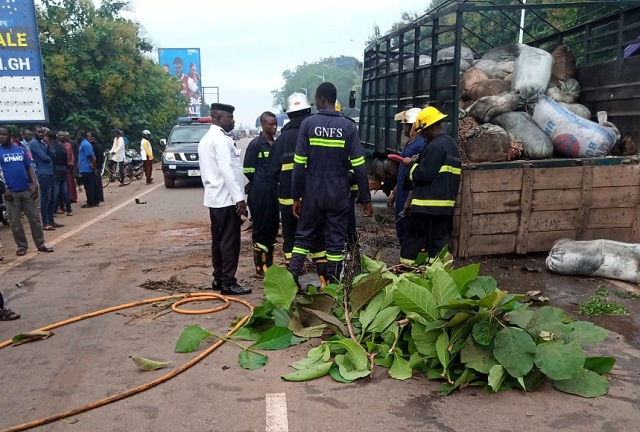 Police at the scene of the accident, while the deceased is covered with leaves Follow @Graphicgh

A 54-year-old ex-serviceman has been burnt to death after a motorbike on which he rode crashed into a stationary truck at Gumani, near Tamale in the Northern Region.

The deceased identified as Seth Kofi Osei, popularly known as Old Soldier, was the chief security officer at the Prudential Bank in Tamale.

The incident is said to have happened at about 5.15am on Friday, October 1, 2021 when the fuel tank of the motorbike, upon impact exploded into flames and burned him to death.

His charred body has since been deposited at the Tamale Teaching Hospital (TTH) mortuary for autopsy.

The Northern Regional Commander of the Motor Traffic and Transport Department (MTTD) of the Ghana Police Service, Superintendent Mahmud Yussif who confirmed the accident to Graphic Online, said the deceased was riding an unregistered Apsonic Motorbike from Savelugu towards the Tamale township.

He said on reaching a section of the road at Gumani on the Tamale-Bolgatanga highway, he failed to observe traffic and as a result ran into the rear portion of a stationary Leyland cargo truck with registration number NR 3245, loaded with assorted goods that had developed a mechanical fault.

He said as a result of the impact, the fuel tank of the motorbike exploded, caught fire and burnt the rider, the motorbike and the rear tyres of the vehicle.

Supt. Yussif said the accident vehicle has also been removed from the road and towed to the police station for further investigation.

He said the owner of the vehicle has been contacted, cautioned and asked to produce the suspected driver to assist with investigation.