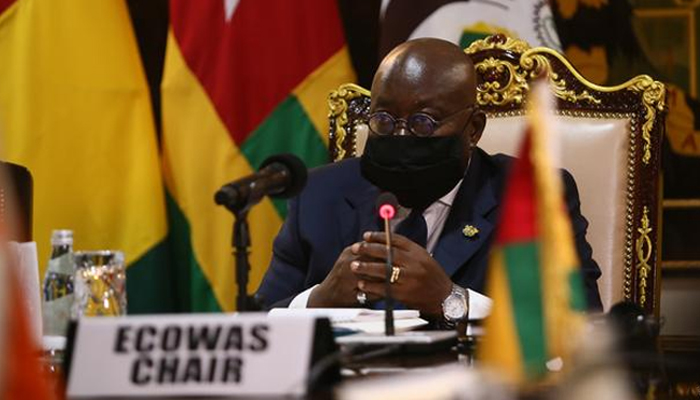 The President, Nana Addo Dankwa Akufo-Addo, has ended his tenure as Chairman of ECOWAS.

The President delivered his last address as Chairman of the regional body at the 61st Ordinary Session of the Authority of ECOWAS Heads of State and Government in Accra yesterday.

The Authority of Heads of State, in a closed-door session after the opening ceremony of the summit, elected the President of Guinea-Bissau, Umaro Mokhtar Sissoco Embaló, as ECOWAS Chairman to succeed President Akufo-Addo.

The 49-year-old political scientist who retired at the rank of Brigadier-General before joining politics, has been President of Guinea-Bissau since February 27, 2020.

He served as prime minister between November 2016 and January 2018.

Delivering his last address as the Chairman of ECOWAS, President Akufo-Addo called on ECOWAS countries to work to enhance their production in agriculture to reach self-sufficiency in the area of food needs.

He said it was the surest way to deal with the sharp increases in global prices, particularly of food and petroleum products.

“We are all victims of global inflationary pressures, which have exacerbated the food crisis in many parts of our region, instigated by the decline in production due to the impact of climate change,” he added.

President Akufo-Addo said the summit was taking place in a very challenging global context, characterised by the effects of the COVID-19 pandemic and the difficult security and political
situation in the region and in the world.

He added that the challenges had been compounded by the adverse impact of the ongoing Russian invasion of Ukraine on the various economies and social sectors.

Touching on the increasing threat of terrorism, President Akufo-Addo indicated that it was imperative to implement the regional action plan against terrorism and coordinate various security initiatives to reinforce the collective response to the destabilising threat.

“Our determination in this area must be stronger than ever. Equally unshaken must be our resolve to maintain the stability of our region and its member states,” he added.

He said the region continued to be the targets of indiscriminate and barbaric terrorist attacks, resulting in the loss of many innocent lives and the deterioration of the humanitarian situation of the targeted countries.

“These terrorist attacks are now not only focusing on the Sahel but also expanding to the coastal states in our region,” he said.

He called for a minute’s silence in memory of all the victims of terrorist attacks in the sub-region and their families.

President Akufo-Addo noted that after the failed coup d’état in Guinea-Bissau in February 2022, ECOWAS decided to deploy a standby force to support the stability of that country and the elected government.

He explained that the deployment of 609 security persons had completed their work, adding: “We must be seen as ready to go the extra mile to ensure the stability of our community and its member states.”

He recalled that on June 4, this year, there had been an extraordinary summit in Accra, during which the leaders had discussed extensively the political and social situation in the region, with emphasis on the current political transition in Mali, Guinea and Burkina Faso emanating from the unfortunate coups in those countries.

“We decided to re-examine this matter during this ordinary summit. ECOWAS remains committed to accompanying these sister nations to return to normal constitutional democratic order,” he said.

The President also revealed that the body would have the opportunity to hear from the mediators, who would advise on the latest developments in those countries to enable ECOWAS to take the appropriate decision.

President Akufo-Addo commended his colleague Heads of State for supporting him as the Chairman of the authority for two terms.

“It has been a great privilege for Ghana and myself to be given the opportunity by you to serve this noble organisation for two consecutive terms, particularly at one of the most trying periods of its history,” he added.

He said he had benefited tremendously from their solidarity and empathy in the exercises of the mandate they had conferred on him, for which he was grateful.

“I will continue to play my part to the best of my ability in the work of the authority,” President Akufo-Addo pledged.