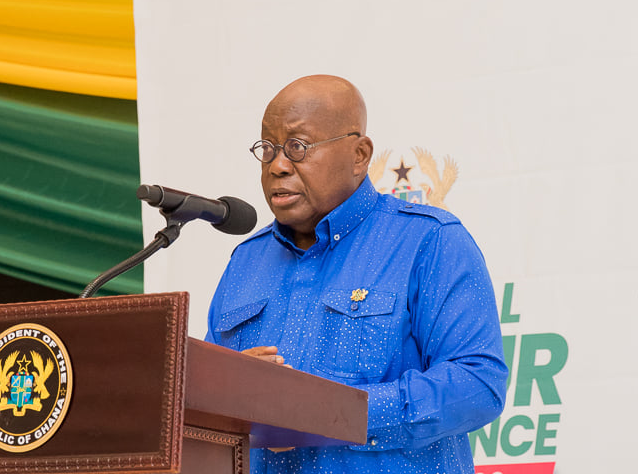 “I believe strongly that it is in the public interest that it should be enacted into law. We cannot continue to live forever on foreign savings.

Those who are concerned about our debt burden are right to focus on it as a major pre-occupation,” he said.

President Akufo-Addo stated this yesterday when he addressed the National Labour Conference (NLC) organised by the Ministry of Employment and Labour Relations in Kwahu Nkwatia in the Eastern Region.

It was on the theme: "Strengthening Tripartism for Peaceful Relations and Resilient Economy", and it is expected to end with a road map and a communique that will inform and shape the government’s approach to the resolution of labour issues for national development.

The President said it was time the country accepted the full implications of the goal of Ghana Beyond Aid and designed the fiscal profile accordingly.

“The Asian Tigers, whom we envy and want to emulate, financed their rapid development from their own savings. We need to do the same,” President Akufo-Addo noted.

He explained that with the COVID-19 pandemic ravaging the economies of the world, including that of Ghana, transforming the economy would require the active involvement and participation of all, including the large informal economy.

President Akufo-Addo explained that an economy in which only a small proportion of the population bore the brunt of direct taxation was unlikely to witness any rapid transformation.

“We have to make concerted efforts as partners to hasten our recovery from COVID-19 by finding intelligent ways of bringing everyone on board to contribute their quota, no matter how small,” he noted.

President Akufo-Addo indicated that the government, for its part, was implementing a policy of cutting the budgets of ministries, departments and agencies (MDAs) by 20 per cent this year as its contribution to measures to ensure fiscal consolidation.

He explained that the country’s taxes, expressed as a fraction of total productivity (Gross Domestic Product — GDP) was 12.2 per cent, compared unfavourably with the rest of the world.

The President said the average tax-to-GDP ratio in West Africa was 18 per cent, with the average for Organisation of Economic Cooperation and Development (OECD) countries standing at 34 per cent.

“It is, thus, no wonder that American, German, French, Japanese and British people, among others, can readily find the means to fund their own development, particularly their infrastructural development, whereas we are constantly struggling to do the same,” he said.

President Akufo-Addo stressed the need to urgently enhance the nation’s capacity for domestic revenue mobilisation to realise its development potential, create opportunities for the vibrant and dynamic youth and deliver improved livelihoods for the citizenry.

“We cannot continue to allow less than 10 per cent, specifically 7.8 per cent, that is, 2.4 million people, of the population carry the direct tax burden of 30.8 million people. We must provide an opportunity for every Ghanaian to contribute towards nation-building,” he added.

The President appealed to Ghanaians, including those participating in the National Labour Conference, “to ensure that the hidden, submerged or informal economy is brought within the remit of the formal economy. This will be one of the surest ways of expanding the tax base for mobilising adequate resources to sustain development.”

“It is encouraging for my government and party, the New Patriotic Party, to recall that the rate of growth of the economy, 5.6 per cent, against the background of the exceptionally difficult circumstances of the COVID-19 era, was still considerably better than the 3.4 per cent we inherited (in 2016) in calmer times from our predecessor administration,” President Akufo-Addo insisted.

The President urged Ghanaians not to forget that prior to the outbreak of the pandemic, the country witnessed average annual GDP growth rates of seven per cent in 2017, 2018, 2019 and part of 2020, when the economy was then generally acknowledged as one of the fastest growing in the world.

He indicated that the proactive decisions taken by the government to fight the pandemic, as well as revitalise and transform the economy, with the GH¢100 billion COVID-19 Alleviation and Revitalisation of Enterprises Support (Ghana CARES) ‘Obaatampa’ Programme to create jobs and prosperity for Ghanaians over a three-year period had begun yielding results.

The first phase of the Ghana CARES programme, the phase of stabilisation, came to an end in 2020.

The second phase, which started in 2021, aims at revitalising and transforming the economy between 2021 and 2023.

It will also include information and communications technology (ICT)/digital economy, developing Ghana's housing and construction industry, reviewing and optimising the implementation of the government’s flagship and key programmes, creating jobs for young people and expanding opportunities for the vulnerable in society, including physically challenged persons.

“As a result of this programme and the policies being implemented by the government, the economy grew at a provisional 5.2 per cent in the first three quarters of 2021. This growth is expected to be sustained in the medium term,” President Akufo-Addo stated.

He added that the overall real GDP for the medium term was projected to grow at an average rate of 5.6 per cent, and that the government remained committed to returning to the fiscal deficit target threshold, as enshrined in the Fiscal Responsibility Act, 2018 (Act 982), from this year.