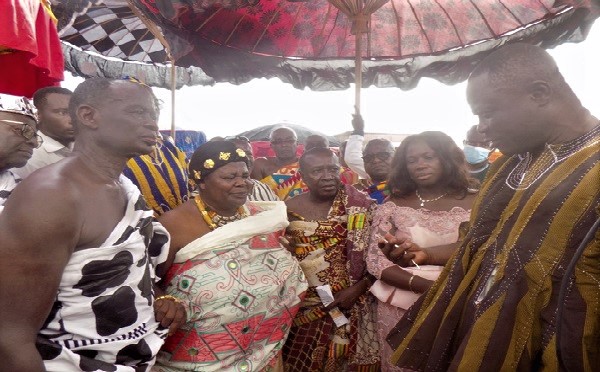 The Managing Director of Memphis Metropolitan Limited, Mr Patrick Kwame Danso, has personally constructed a modern palace for Akyem Asene near Oda at a cost of GH¢2.1 million.

The well-furnished one-storey edifice is composed of 13 bedrooms, two large conference halls, one large open hall on the ground floor, two offices and a number of toilets and washrooms.

The queenmother of the Akyem Kotoku Traditional Area, Nana Akua Asantewaa III, who inaugurated the palace at a ceremony at Asene , commended Mr Danso for providing such an edifice, which is one of the best in the Eastern Region, for his hometown.

She advised the people of Asene to bury their differences and work in unity to develop the town.

Nana Asantewaa condemned the protracted chieftaincy dispute in Akyem Kotoku which had retarded the progress of the traditional area.

The front view of the new palace at Asene.

She appealed to Mr Danso to assist financially in reconstructing the Akyem Kotoku Omanhene’s Palace at Oda which had collapsed.

At the ceremony, the Aburihene, Otobour Djan Kwasi, was also full of praise for Mr Danso for giving his hometown such a facility and urged other wealthy people in the country to take a cue from him to assist in the development of their communities.

He advised Ghanaians to eschew chieftaincy disputes and instead utilise resources wasted on such litigations to develop their traditional areas.
Otobour Djan Kwasi donated GH¢10,000.00 as seed money for the additional refurbishment of the palace.

Giving the background on the imposing edifice, the Gyaasehene of Asene, Nana Amoa Daadom, said in 2017, the chiefs of Asene approached Mr Danso to release one of his machines for the demolition of the old, dilapidated swish palace which had become a death trap.

He said after waiting for more than one year without seeing the progress of the new palace, Mr Danso intervened in 2018 to construct the modern edifice for the town which is currently among the best palaces in the country.